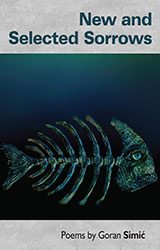 New and Selected Sorrows draws on Goran Simić’s earlier collections, notably Immigrant Blues, Sunrise in the Eyes of the Snowman and From Sarajevo with Sorrow, together with a new sequence, ‘Wind in the straight-jacket’ and many poems published in English for the first time. It is a book about passports and borders, rats and wolves, soldiers and ghosts. It is a record of the realities – and the unrealities – of life in the Balkans, narrated by ‘an ordinary man with ears of ordinary silk’, whose sees the face of sorrow in ‘the Sarajevo wind leafing through newspapers / glued to the street by a puddle of blood’.

‘Soberingly frank but continually fascinating account of life and love among the ruins of civilian privacy, where hitherto-innocent objects – a diary, a shoe box, a radio – seem almost to satirize their owners.’

‘The brilliance of these poems lies in their detail, their lack of rhetoric, and their passion.’

‘Goran Simic has written with tact and restraint in daunting and provocative conditions. The fact that his terrifying testimony seems more whispered than screamed is part of its power.’

‘There is a great deal British poets can learn from this... a serious engagement with literature and the world.’

‘an essential chronicler of a conflict which besmirched the 1990s in Europe, and in doing so he exposes, credibly and feelingly, the cost of all war.’

‘endeavours to blueprint the inner world of the outsider.’

Goran Simić was born in Bosnia-Herzegovina in 1952. A major literary figure in the former Yugoslavia, during the Bosnian War he was caught in the siege of Sarajevo. After the war he moved under the auspices of PEN to Canada, where he taught at the University of Toronto and was writer-in-exile at the Banff Centre for the Arts. His poetry has been compared to that of Tsvetaeva, Brodsky and Herbert. Goran Simić’s books have been published in a dozen languages. He has published twenty books of poetry, two collections of stories, ten puppet plays and three opera-libretti. He currently lives in Sarajevo.