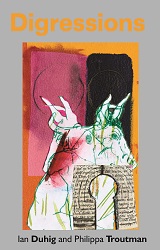 In 2013 – the tercentenary of the birth of Laurence Sterne – Philippa Troutman and Ian Duhig started digressing, getting lost in time and space around Shandy Hall. They chanced on riches from Viking ghost stories to Conceptual Poetry, in a meteorite-riddled topography of forgotten monuments, mazes, ruins and traps, sharing their discoveries and creations in texts, exhibitions and online. The results range from the humorous and moving to the fascinating and macabre, engaging and extending Sterne's legacy for the twenty-first century. 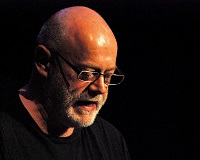 Ian Duhig has written six books of poetry, won the Forward Best Poem Prize, the National Poetry Competition twice and been three times shortlisted for the TS Eliot Prize. He has written for radio, the stage and for an award-winning volume of short stories. He has also worked extensively with other artists including musicians, composers and film makers. His last book, Pandorama, contains a sequence based on Philippa Troutman's The Shanties.

Philippa Troutman works with a broad base of media including the whole range of printmaking techniques as well as painting, drawing, 3D and photographic imaging. She has worked with artists in other fields especially on text/poetry projects. She lives and works in North Yorkshire, where her interest in social history led her to research and develop The Shanties, an acclaimed travelling exhibition about the railway navvies and their families.