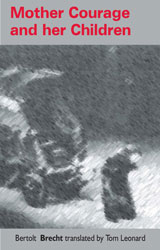 In this new translation by the distinguished Scottish poet Tom Leonard of Brecht's great 1939 anti-war play Mutter Courage und ihre Kinder, Mother Courage is a working-class woman from the West of Scotland speaking the racy working-class nonstandard language of Glasgow. The rest of the cast speak varieties of English language subtly shaded for irony, accent and all the social hierarchies carried by diction and regional language in a land where diction is an index of class.

Best known for his early poems in Glasgow dialect such as 'The Six o'clock News', Tom Leonard invests his translation with the arguments about language and politics that have run as a thread through all his work for almost fifty years. It is a play about the language of politics and the politics of language. As Leonard says, 'the hero of this Mother Courage is the language itself, and it is an anti-hero. Only Kattrin is allowed in her final action to be a proper hero - and she is dumb.'

Five songs from the play can be heard on Leonard's Selected Poems, a cd recorded live at the STUC in 2011, as part of Glasgow's May Day celebrations.

The Ballad of the Wifie and the Sojer

The Song of Fraternisation

For All the Talk of War and Glory

'Leonard's writing has been immensely influential as a harbinger of critical change in how we think about poetry and about how literature is taught and used in schools and universities throughout the country... his work speaks for human compassion and for the necessity "not to be complicit" in a world that is saturated with sound bites, social inequality and corporate flannel'.

'effectively re-conceives one of the landmarks of high European literary modernism by engaging with it on its own terms.'

'Leonard approaches Brecht as a radical poet approaches a political soulmate... This new version of Mother Courage will last for the same reasons as the original - it speaks to us, all of us, in the here and now.'

'a fine effort from Tom Leonard... a clever idea and Leonard carries it off with the aplomb you would expect.'

Bertolt Brecht (born 1898) was arguably the greatest German poet and playweright of the twentieth-century. His plays included Bael, Drums in the Night, Man Equals Man, The Threepenny Opera and The Measures Taken. After leaving Germany in 1933, Brecht lived in Denmark, Sweden, the Soviet Union and the USA. While living in exile he wrote many plays, including Life of Galileo, Mother Courage and Her Children, The Good Man of Szechuan, The Resistible Rise of Arturo Ui and the Caucausian Chalk Circle. In 1947 he moved to East Germany, where he established the Berliner Ensemble. He died in 1956. 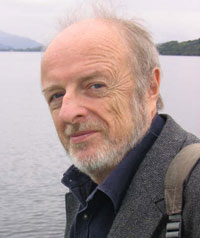 Tom Leonard's many books include a biography of James Thomson and a pioneering anthology of neglected nineteenth century Scottish poetry, Radical Renfrew. His Intimate Voices: Selected Works 1965-83 was banned from Central Region school libraries in the same year that it shared the Scottish Book of the Year Award. In 2010 his Outside the Narrative: Poems 1965-2009 was the Scottish Poetry Book of the Year. A collection of his literary and political criticism was recently published as Definite Articles: Selected Prose 1973-2012.