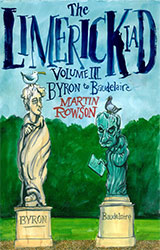 Every week since 2006, the award-winning cartoonist and writer Martin Rowson has been making a fool of himself in The Independent on Sunday by reducing the work of some of the world's best-loved writers to a series of puerile and filthy limericks. Following the success of the first two volumes of The Limerickad (from Gilgamesh to Jane Austen) The Limerickiad volume III lays waste to the literary greats of the nineteenth-century. Rowson mangles Melville, puts the boot into the Brontčæs and defaces the complete works of Dickens. He even finds time to write a limerick in homage to its inventor ('When a runcible fellow called Lear...').

The Tenant of Wildfell Hall

'another must-have for the bookish, the cynical and gourmets of deliberately dreadful verse.'

'He writes as well as he draws... a riot of literature and laughs.'

'a book which wears its erudition like a drunk the suit heŌĆÖs slept in... a great way to get people who think literature is stuffy and superior talking about books.'