The Tale of Walter the Pencil Man 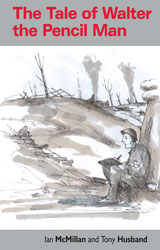 The Tale of Walter the Pencil Man is a collaboration between the poet and broadcaster Ian McMillan and several times Cartoonist of the Year Tony Husband. It tells the story, in six-line rhyming stanzas, of a young lad from a Yorkshire pit village who finds himself caught up in the terrible slaughter of the First World War and records the things he sees around him with a pencil and some paper.

'No better piece of writing might be inspired by next year's centenary of the start of the War to End All Wars.'

'Visually, this book is a joy - the perfect balance of ink and paper'

The Tale of Walter the Pencil Man 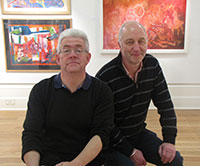 Ian and Tony have worked together for many years doing a live show 'A Cartoon History of Here' and they have created several comedy books for The Dalesman including 101 Uses for a Yorkshire Pudding and Daft Yorkshire Fairy Tales.

Ian McMillan is a freelance poet, writer, broadcaster and performer. He presents The Verb on BBC Radio 3 every Friday night and is currently presenting BBC2's Coast. His many books include I Found this Shirt, Talking Myself Home, Dad, the Donkey's on Fire! and Ah've Soiled Ma Breeks!

Tony Husband is one of the UK's leading cartoonists. He draws The Yobs in Private Eye and has worked for The Times, The Oldie, The Spectator, Punch, The Nursing Standard and most other publications you might care to mention. In the 1980s, he co-devised and edited the popular children's comic Oink! and its TV spin-off, Round The Bend.