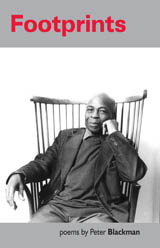 Peter Blackman (1909-1993) was one of the early pioneers of Black-British poetry. Although his work has been unavailable for many years, he was once a major figure in radical Caribbean politics and culture in London. His friends included Paul Robeson (with whom he visited the Soviet Union in 1949), Nazm Hikmet, W.E.B. Du Bois and George Lamming. In the 1950s, the composer Alan Bush set part of Blackman's 'My Song is for All Men' in his cantata Voices of the Prophets. In 1980, the ex-Soft Machine drummer Robert Wyatt recorded Blackman's poem 'Stalingrad' on the flipside of Stalin wasn't Stallin'.

Footprints contains four long poems, 'My Song is for All Men', 'Stalingrad', 'Joseph' and 'London', plus a short elegy to Claudia Jones, Blackman's friend and comrade and the founder of the Notting Hill Carnival. Footprints is a book about empire and racism, resistance and struggle, from Korea to the U.S. Civil Rights Movement. And it is a book about liberation, from Stalingrad to London.

'At a time of dramatically anti-establishment gestures, Peter Blackman's quiet, undemonstrative dignity as he crystallised key moments in our collective history, was a heart-warming revelation.'

'Peter Blackman unified a black and socialist consciousness with a love for struggling humanity, expressed with a use of English which is profoundly beautiful and unique to his generation.'

'His poems are like great verbal atlases of the working people of the world, expressed with moving and beautiful wordscapes.'

Peter Blackman was born in Barbados, the son of a stonemason. He won a scholarship to Harrison College, and studied Theology at the University of Durham. Ordained as a priest, he was sent to work as a missionary in Gambia, but resigned from the Church and moved to London in 1937. He was Chair of the Negro Welfare Association, editor of the League of Coloured Peoples' journal The Keys, Secretary of the Committee for West Indian Affairs, and helped to edit the Communist Party's Colonial Information Bulletin. the war he worked as a railway engine fitter; he was the only member of his NUR branch who could read Greek and Latin.

Chris Searle has worked as a teacher in Canada, Tobago, East London, Mozambique, Grenada and Sheffield. Among his books are Classrooms of Resistance, Words Unchained, This New Season, We're Building the New School, The World in a Classroom, Grenada Morning, The Forsaken Lover, Pitch of Life, Red Groove and Forward Groove. His books of poetry include Red Earth, Common Ground and Lightning of Your Eyes. He writes a weekly jazz column in the Morning Star.