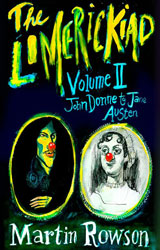 Following the success of The Limerickiad volume I, Martin Rowson continues to lower the tone by reducing literary classics to a series of terrible limericks. Mixing Low Comedy and High Seriousness, awful puns and dodgy rhymes, The Limerickiad volume II takes the story forward from John Donne to Jane Austen. Along the way he takes the piss out of Jacobean Tragedy, mangles all XII books of Paradise Lost and hangs out with some like-minded Augustan satirists before ridiculing the entire European Romantic movement.

'a tumbling torrent of twisted puns and tortured scansion.'