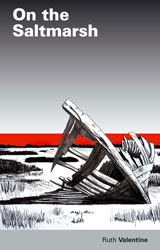 On the Saltmarsh is a book about language and silence. There is the historical silence that refuses to say where the bodies lie in Chile, Kosovo and Baghdad. There is the language of old photographs, bloody handprints and broken headstones. There are the suppressed memories of the survivors, the redrawn borders of the victors and the unmarked graves of the defeated. It is a book about migration and exile, contemporary history and everyday losses, a lost map of shifting sands, rising tides and the swollen silences of the Saltmarsh.

The Boat on the Saltmarsh

The Saltmarsh as Port of Entry

The Saltmarsh as No Man's Land

'Ruth Valentine takes us to places such as Kosovo and Baghdad to show us ordinary people in the epicentre of conflict; those who are missing, those who are executed, those who survive. It is rare (and reassuring) to find a poet writing about the political in these difficult times; Valentine's poems are powerful, but never dogmatic, always humane and honest.'

'Valentine is a very gifted poet. She has mastered the craft of starting a poem in a low key, almost conversational style, describing a past event, quietly dropping a single disconcerting word into the lines which unsettles but you’re not sure why. So you read on, and there are further hints, subtle, understated, but always pulling you towards an exploration of something you realise has universal importance.'

'It is refreshing to come across a poet who is not afraid to re-enact, and in this way confront, uncomfortable political and historical truths.'

‘a beguiling, exceptionally composed volume of poems touching on some of the most sensitive nerve-points of mid-to-late twentieth century history.’

Ruth Valentine is a poet and activist for refugee and migrant rights. Her poetry collections include The Tide Table (1998), The Announced (2009),