Tea with the Taliban 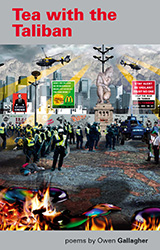 Owen Gallagher's second collection of poems is a book about tribes, real and imagined - the warring tribes to which we all belong. It's a journey to dystopia, from the Gorbals in the 1950s to contemporary Palestine, a close study of our need to belong to something bigger than ourselves, the shared identities whose 'anthems, arms and flags' are stockpiled in history's wardrobe. There are the loyalties of family and friendship, the sectarian and ideological loyalties of religion and class, of politics and nation state. There are the binary oppositions of Left and Right, Need and Greed, Right and Wrong, the banners of difference which are used to justify the imperial wars in Iraq and Afghanistan. Along the way we meet Emma Goldman, Trotsky and Shelley, and are shown glimpses of a distant worker's republic where Robert Owen cocktails are served on the beach every evening and parliamentary debates are conducted in verse.

The Minister of Poetry

Democracy was a Fine Idea

'Gallagher is a trouble-making poet, stirring things up, puncturing and provoking his way through scenes, confessions and memories. He'll keep you asking yourself which side you're on. This book is not a lullaby.'

'Gallagher celebrates the dignity and resilience of the working class.'

'Gallagher is a superb poet.'

Jane Routh in The North

‘I am delighted that poets such as Owen Gallagher exist.’

Tea with the Taliban 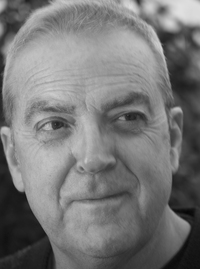 Owen Gallagher was born in 1949 to Irish parents in the Gorbals area of Glasgow. His previous collections are Tea with the Taliban (also published by Smokestack), Sat Guru Snowman and A Good Enough Love. He was a primary-school teacher in Southall. He lives in London.