Volume I: From Gilgamesh to Shakespeare 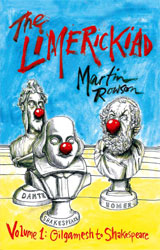 Every week for the last five years, award-winning cartoonist and writer Martin Rowson has been telling the story of World Literature in The Independent on Sunday. In limericks. With scrupulous regard to the rigours of the limerick form, Rowson has endeavoured to encapsulate humankind's fascination with the written word in all its forms, whether poetry, drama or prose – as a series of bad jokes, cheap puns, strained scansion, excruciatingly contrived rhymes and pure filth. Now collected together for the first time, The Limerickiad: Volume 1 takes us from the Sumerian classic Gilgamesh to the Complete Works of Shakespeare, with both verse and illustration displaying Rowson's reverence for the original texts. The Limerickiad promises to do for Literature what 1066 and All That did for History.

'Gory, bawdy, crass, crude, brutal - and a tour de force not to be missed by fans of classic literature, appalling puns and Rowson's inimitable style.'

'although the rhymes can sometimes make you groan, they're meant to, and they delight you with their inventiveness.'

'a delightfully dirty digest of literature from Gilgamesh to Shakespeare.'