The Collected Poems of Tom Wintringham 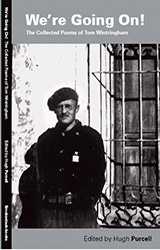 Tom Wintringham (1898-1949) was a man of action, a revolutionary, a soldier and a poet. During the First World War he served in the Royal Flying Corps; in the Spanish Civil War he commanded the British Battalion of the International Brigade ; in the Second World War he was the driving force and inspiration behind the establishment of the Home Guard. He was a founder member of the Communist Party, and one of the twelve Communist leaders gaoled for 'sedition' in 1925. He edited the Worker's Weekly, helped launch the Daily Worker and was one of the first editors of Left Review. Expelled in 1938 from the Communist Party, Wintringham co-founded the Commonwealth Party and almost won a famous war-time by-election. His poetry was published in many magazines, and his numerous books included The Coming World War, Mutiny, English Captain, The Politics of Victory, People's War and the best-selling Your M.P.

Drawing on the newly opened Wintringham archive, this book contains nearly all Tom Wintringham's poems, many of which are published here for the first time. From the Great War and the October Revolution, via the General Strike to Spain and war against Hitler, Wintringham's poems are a unique record of those revolutionary years, a compelling cocktail of ideas and imagination, romance, realism and action.

Neither fools nor children any longer;
Those ways, traits, gone and away.
That once made life–a–luck game, death a stranger
We're going on.

Dynamo–driven city waiting bombers
Roadways barricade–unpaved, fear
In the torn minds: the mind remembers
What it's all for.

Death means the corpses warm alive when buried:
Death means the retching brothels where on black
Death's tide, death fear, an army of boys is carried
To a pox wreck.

And life's a matter of beating this, of breaking
By our hardness, and a held hand, out
Of fury, frustration, fear, the waiting, the shouting,
The hate of the fate.

Neither fools nor children, we who are joining
(twenty years ago I knew war's face)
We make what can wreck others into our gaining,
Into our choice.

Too many people are in love with Death
And he struts thigh–proud, never sleeps alone;
Acknowledge him neighbour and enemy, both
Hated and usual, best avoided when
Best known.

Our enemies can praise death and adore death;
For us endurance, the sun; and now in the night
This electric torch, feeble, waning, yet close–set,
Follows the surgeon's fingers. We are allied with
This light.

Men are tied down, not only by poverty,
By the certain, the usual, the things others do,
By fear for and fear of another. Liberty
Is a silly word, in this flat life, and used
Usually by a Lord Chief Justice. It smells of last century.
There are free men in Europe still :
They're in Madrid.

Men are so tired, running fingers down football tables
Or the ticker–tape, or standing still,
Unemployed, hating street–corners, unable
––Earth–damned, famine–forced, worn grey with worklessness –
To remember man hood and marching, a song or a parable...

While the free men of Europe
Pile into Madrid.

Men who could not be broken even by Hitler's prisons,
Rubber truncheon, police spy, surrender of friends,
From the Lipari islands, from the divisions
Roadmaking in French Morocco under the sun;
And from comfort, good wages, home – each of them
made his decision

The free men of Europe, not yet ten thousand,
Raid forward from Madrid.

Forming today the third of the brigades, equipping Italians,
Frenchmen, Germans, Poles, Jugo–Slavs, Greeks,
––The names mean languages only : these are Europeans –
The staff, corduroy–trousered, discuss when Franco will use it:
'Two weeks' or 'a month yet'? How many gas–masks by then?

Will Europe, will England, will you 'have given the gas–masks'
For the free men of Europe
Entrenched in Madrid?

'No one carried a greater charisma in those memorable days than Tom Wintringham. To my generation, his name re-creates a vision of beckoning symbols along the road to a New Jerusalem.'

'Wintringham spoke for his generation; he was a prophet who should have honour in his land.'

'This book should be in all libraries.'

Hugh Purcell worked for many years as a producer for BBC radio and television. Credits include The Road to War and the BAFTA-winning American Civil War. His previous books include Fascism, The Spanish Civil War, Revolutionary War and a biography of Tom Wintringham, The Last English Revolutionary (2004). He is a Chevalier de l'Ordre des Arts et des Lettres and a FRSA.