Tough is the bitter-sweet taste of urban romanticism, barbecued bear and the bright lights of Grangetown, from the biggest mouth on Teesside. Poet Andy Willoughby goes back to the estates where you have to be tough to survive. Sometimes he acts tough, sometimes he talks tough. Sometimes he is not so tough after all. Tough is his first full-length collection. If you don't like it - tough.

Look for the window with the ultra violet glow,
Blue light warning so the neighbours will know –
She's preparing her body for the local disco,

She looks like an orange,
But she's gonna get her man –
Cos she's the girl with the artificial tan

Thighs strain at her tight white skirt,
Stilettos are deadly as her perm starts to flirt,
She's looking for a man in a winter T–shirt –

She looks like an orange,
But she's gonna get her man,
Cos she's the girl with the artificial tan

Wants a real man doesn't want a mouse,
Wants a brain dead dickhead built like a house;
Arms like iron, chest like a horse –
Eats steak and eggs, hates "poufs" – of course,

She looks like an orange,
But she's gonna get her man –
Cos she's the girl with the artificial tan

Half past two and she's too drunk to know,
The faulty physique of the bloke she's got in tow,
He's a half–assed hippy, well gone on blow –

I can take a lot
You better believe it,
I can take it that it got to the point
Where you extracted the usual promises
Neither of us knew for sure could be kept
Yeah, I can take that,
I'm cool playing the fool for you
To lift your spirits – honey,
It's no skin off my nose.
I can take your appropriation
Of my favourite walks and places,
So that now our whirling ghosts
Dance there before my nauseous eyes,
They'll fade and there are other places
Where my soul can breath.
I can even take the way the words flowed –
Boiling clouds became picture poems,
Along with sudden blue jays,
Childhood forests,
Springtime chestnut candles:
I meant the words and they still
Have some light left in them.

But I can't take the morning
I picked up one of your shoes,
At the end of the crumpled love–made bed
While you sang and boiled our coffee,
The way I noticed for the first time
How tiny were your feet,
As I held the leather
In my hand like an injured bird,
Then placed it down
With the care of a surgeon.
Like Jimmy Cagney in Public Enemy,
It's down in the roots of me
And I'm forced to say
Enough,
I ain't so tough!

No, not so tough.

She smoked cigarettes four at a time,
The first time I really knew I'd seen her,
In the playground she played football with the boys,
Fought and swore but could be quiet as a murmur,

In the days before sunlight could be
Transformed into some idea of freedom,
We walked together saying nothing or joking;
When one of the horses in the fields off the estate

Broke free she cried for it being run over:
The nervous kicking quick black hoofing
Left us as wordless as the endless stream
Of numbness that soaked us to the bone

She had given up her smoking the last time that I saw her,
We both had words we never knew when we first met,
But despite the clever way we filled the gaps,
There was more in the silences that we left.

'...a poetical manifesto chronicling the hopes, fears, rituals, traditions and metamorphoses of a people proud of past achievements and apprehensive of future prospects, shot through with... wit, audacity and inventiveness. '

'These poems often breathe a humility and tenderness that belies the title.'

'Andy Willoughby is a power-house of creative energy, a renegade poet, a traveller, a performer, a ranter, a modern day shaman. His poems bring to life the hard-edged facts of life, loss and love ; digging beneath the surface and drawing out the mythic and the epic qualities of everyday experience, to turn them on their heads.'

'Andy Willoughby touches the political, and social, and with the precision of a surgeon flips it on its back, to expose the heartbeat inside. Poetry at its most honest, that fills you with a stillness and sadness at the intake of breath before every F word, at each microcosm carved of stone.'

'Tough like meat. Not much gristle on these bones. Andy Willoughby is one of the meatiest poets I know, as loud on the page as on the stage.' 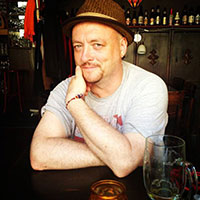 Andy Willoughby is a freelance poet, playwright and workshop leader. He co-runs The Electric Kool-Aid Cabaret and Ek Zuban press, working in community and educational settings with hard-to-reach groups. He is a former UNESCO City of Literature Writer in Residence in Tartu, Estonia. His other books include Tough and Between Stations (also published by Smokestack) and SAMPO: Heading Further North (written with Bob Beagrie). He lives in Durham.