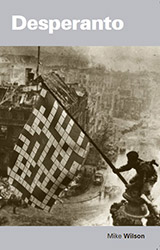 Desperanto is the universal language of despair. It is spoken by the hopeless, learned by the luckless and sung by the broken armies of losers, lovers and lefties everywhere. It is the literary language of the More or Less Deceived.

With a bit of help from William Blake, Jake Thackray, Philip Larkin and Georges Perec, Mike Wilson offers a beginner's guide to the emotional grammar of Desperanto, where defeat is a regular verb, hope declines, and the future is always conditional.

Combining traditional form and formal experiment, playground wit and serious jokes, politics, people and poetry, Desperanto is a primer of crossed lines, crossed swords, cross words, crosswords and the c-word. It is a rough guide to the dialects of despair and self-deceit spoken in punland, funland, bling-land, England and the strange kingdom of Hinterland, whose citizens rarely mean what they say or say what they mean. Desperanto without tears.

Sad poetry. It's written everywhere,
by broken hearts in search of self-expression:
the universal language of despair.

She writes of anguish (and it's hard to bear).
She chisels, from the floes of her depression,
sad poetry. It's written everywhere.

He tries (in vain) to emulate John Clare,
to forge a bridge between his self-obsession and
the universal language of despair.

But he's not self-aware, not debonair,
he lacks the savoir-faire, the self-possession...
Sad poet, try! It's written, everywhere,

that anyone who's sad, and solitaire,
should curse in verse, as if their flair could freshen
the universal language of despair.

And round they go - mad fingers twirling hair
(which tends to give a negative impression:
sad!). Poetry? It's written. Everywhere,
the universal language of despair.

A flag of truce. An armistice. A pause...
It's hard to talk to dads: they've been in wars.
They're victims of their gender, or their era:
they're products of their dads — their pride, their fears,
their wordlessness... It's taken forty years
for me to find a way of getting nearer

to things he'd never bring himself to say.
(A man who shows his feelings is, well, gay.
It's just not done. You gauge another man
by how he throws a punch, or kicks a ball,
sinks pints or wins pub quizzes; physical
expressions... Keep your distance if you can,

and keep it cryptic, if your son should try
to ask about your feelings on the sly!)
It's puzzling... we have (one) a cross to bare...
We've never shared an angry word... Such puns
become the way for fathers and their sons
to talk in riddles of the thing they share:

We call a spade a playing card — of course.
A spanner is a bridge between two shores,
and honesty's a flower is a stream.
A legend is a foot, and time's a herb.
A lie's a lie; or maybe it's a verb,
and nothing's ever what it ought to seem.

So – meaning means that everything is hidden,
and anagrams occur to you unbidden,
and stories sound like other people's flaws...
Your brain's dog–legged, oblique, and in your eyes,
all words are just another in disguise,
and love... it's just a word for tennis scores.

Love's nothing: it's the 'o' in schizophrenia.
It's scattered through the Louvre. It's in Slovenia.
It's anagrammed, or turning, in revolver.
It's back there — at the start of evolution.
It's wrapped in gloves, dissolved in the solution
(for lover's just an anagram of solver!).

The chequered flag. It's there in black and white.
My dad would rather take his pen and write
the answer to 9 Down in 4 Across
than say he loved me. But I know it's there —
as sure as eggs have layers. So I care...
And as for being loved — he's at a loss:
he doesn't have a clue when love's in clover.
A learner–lover — that's my dad ALL OVER!

For those of us who'd read Das Kapital,
who'd thought we were a stone's throw from Class War,
believed that History would prove us right
in time, in a millennium or two...
some twenty years have passed since we were left
illusion–less. The walls collapsed inside us,

as solid as the walls that fell around us.
We'd manned those barricades, fought Capital,
marched with the Miners, Laboured with the Left.
We'd kept the faith that won the last World War
from Fascism; and, somewhere in there, too,
the decent sense that Might's not always Right.

Despising the religions of the Right,
their God–AND–Mammon values (since for us
there was a Third Way to aspire to:
a human faith in human capital)...
Like photos of once–trendy clothes we wore,
that once–blind faith, that fashion, 's left

abandoned. And embarrassing. We're left,
two decades on, uncertain what was right
and what is Left... The media tut; make war
on Stalin, Mao, their purges... And for us
re–writing History is, to cap it all,
what gloating victors are entitled to...

We're losing our religion. Only to
emerge into a faithless age that's cleft
by two blind faiths: Consumer–Capital,
the 'shopping–is–my–fundamental–right'
of the corporate multinational U.S.;
and (so–called) Terror: Islam's 'Third World' War.

You need two gods to make a Holy War.
The daily ritual slaughter of these two
(both suicidal) tribes, anointing us
with oil and blood and sacrifice... We're left
inured and blinded, can't tell wrong from right,
we can't tell Whitehall from the Capitol...

It's tempting to forget that we're at war
when Capital makes sure The Price Is Right.
What's left, for those who used to think like us?

'at times this feels less like a poetry collection than it does a joke book.'

'I will read this one again and again.' 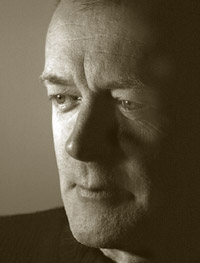 Mike Wilson is a writer and musician. He has written over 80 books for reluctant-reader teenagers and beginner-readers. Musical credits include a one-man show of Jake Thackray songs and Teeth Like Razors, a theatre-piece about the lives and works of Brecht, Weill and Eisler. He recently toured the UK with the Curt Collective, performing live soundtracks to the silent-film classics Nanook of the North and Finis Terrae. He lives in Nottingham with his wife and son. Desperanto is his first collection.