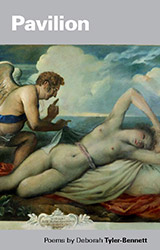 The Brighton Pavilion is one of Britain's best loved follies. Built for the Prince Regent (later George IV) to entertain his mistresses, it is a Grade 1 listed building, a monument to dandyism and a museum of royal kitsch. Between the Pavilion and the ruined West Pier lies the coast of Greeneland, peep-shows and arcades, cheap thrills and expensive mistakes.

Deborah Tyler-Bennett's new collection is a celebration of the world of the English dandy, its gorgeous peacock feathers and fading glamour. Her cast of eccentric and complicated characters entertain their listeners at the bar, flashy and flamboyant as Brighton's fantasy Pavilion, revealing the sad truths and disturbing secrets behind their cheap make-up.

There's a dance going on in the dark above our heads,
men pressing women against laundered suits,
a girl's surprised to find her older partner dances
better than boys, a woman leaves imprinted lips
staining the bar–tender's milky cheek.

Above us, the burned–out Pier against evening's
Guinness–black curtain, where feet shuffle in rhythm
(a few toes getting stepped on), and maybe this
close stepping's what we're made for,
hands tight against gabardine or georgette clad backs.
It may be the sea, or the dancers' suggestive whispering:
'At last, at last, at last ...'

Above our heads, pier–bones lost to night,
where phantoms clutch each other.
Only the sea? Or a woman breathing to her partner,
before kissing him: 'I wish tonight would last,
would last ... would last ...'

Dan Dare and the Mansfield Aliens

Floral shirt, striped strides, handkerchief, no tie,
faux name, Dan Dare, silk monogrammed underwear,
Italian jobbing winkle–pickers, scarf like women's frilly knickers,
publishing youth magazines, don't believe in modesty,
streaky bouffant blow dried, never seeming tongue tied,
manicure, aftershave, gets mistook for Michael Caine,
isn't going to get a wife, 'lived in London all his life.'
Sassoon ... Carnaby, shop to make the world free,
dolly–mixture tinted plaid, always walking in the shade,
dark lenses sober Chelsea vista, never answering his sister's
calls, dreads visitations, cuts her from his swinging nation,
cotton dress so home made, prefers lemonade
to champagne any day, says she just came out that way:
'IN MANSFIELD' (let him mock, but it runs through her like rock
and she knows that he's ashamed: 'won't visit our Mother's grave,
impersonates a Londoner, doesn't know his nearest neighbour,
'birds' come, 'birds' gone, doesn't stick with one for long').
In that bit before it's light, bitter words are dynamite,
come the middle of the night, even he suspects she's right.
Glad to put her on the bus, nothing further to discuss.

Convene, so hip, buy at Granny Takes A Trip,
be Lord Kitchener's Valet, dandified and glad to say
he celebrates his inner Dare, loves the way old women stare.
Behind his hankie, paper poke from a knackered envelope,
legacy contained inside, only removed when she died,
thinning band of hollow–tin, Mother's tarnished wedding ring.

he said: 'It's raining out there, and we're both stuck,
might pass an odd hour,' he coughed, passing thin hands
through age–bleached hair. 'Lived in Soho, just after the war,
and later, rum lot we were, used to go to ...
What was it blasted called? The Colony Room!
Landlady looked a bit like you. Met Francis Bacon
once, though didn't know, till after, what he did.
And, in the Fifties, met ... what was her name?
Film star ... blonde ... big breasts ... sorry, but they were ...
No, it's passed me by! She was quite lovely, though,'
aqua eyes glimmer under folded lids,
'mixed crowd – painters, poets, ex–service, the odd
actor, always on edge it seemed to me, Diana Dors!
That was that woman! Knew I'd get there.
Dylan Thomas once spilled a pint over my brogues,
was it him? Or that drunken painter? Minton? Minter? Rogue
fellow, used to have Casino jaunts with him ...
another time saw that film–actress, lovely,
luminous blonde, what was her name?
No, don't say it, it'll come to me, love, always does,
in that black dress, you look a bit like a club landlady I once knew,
now, let me tell you ...

'a striking collection, worth seeking out.'

'bowls along at a wonderful pace.'

'a confident and distinctive voice'

'Her apparently effortless writing, her dry–as–a–bone humour, make the subjects of this world tolerable'

'wonderfully evoked... bowls along at a wonderful pace.' 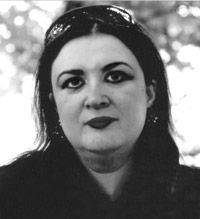 Deborah Tyler-Bennett's previous publications include Clark Gable in Mansfield (2003) and Take Five (2003). In 2001 she won the Hugh MacDiarmid Trophy at the Scottish International Open Poetry Competition. She is the co-author of a creative writing web-package for the Victoria and Albert Museum, and helped create 'Art Box' for Leicestershire's Open Museums' Artworks Collection. She edits the magazine The Coffee House and lives in Loughborough.