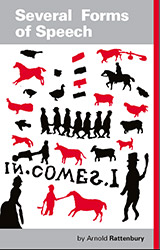 Several Forms of Speech: New, Early, Escaped and Last Poems brings together poems written by the distinguished poet Arnold Rattenbury over a sixty year period. The earliest was published on the eve of D-Day; the last was written as part of the campaign to save the Community Hospital in Blaenau Ffestiniog in North Wales, where Rattenbury lived.

These poems are written in many different voices - public and private, personal and political, lyrical and satirical. Some are new, others are uncollected or from unfinished books. An extract from a verse-play rubs shoulders with a chapter from an unpublished verse novel. Idiosyncratic, technically brilliant and eloquent with passionate anger, Several Forms of Speech features a cast of painters and paintings, clowns and mummers, friends and foes. It's a book about art and love, empire and war, faith and community. And it is a reaffirmation of the necessity of Revolution.

Tell me when I climb the side
And watch this island lumbering west
Why old Europe has to die
Before there's peace, loving at last.

And run the beaches crossed with fire
And hunker down into a ditch –
Tales of Decency's and the Poor's
black enemy, Privilege.

Tell me the moral of these tales:
What gentleness must leave for dead
(Even becoming what it kills);
That lurch of heart and loss of head

Alone bring blacknesses to doom.
Tell me now. Dug–out is all
The time peace has – this grave room
In a mean while – available.

Sixty years back and you could watch
the master builders' apprentice pass–outs:
young lads quarter–scaling, from a batch
of blueprints, risers, half–landing, next
three risers, all banisters, rails,
newel; and gawp at youth so expert.
Then the event went missing. Masters
saw no need of the skills, blind bastards.

Here's an eight–sided box: seven
by seven, the height built up on fourteen
square–cut half–inch pieces, uneven
in length but once in each the important
octagon angle. Abutments a miracle,
tighter than the blocking on the pyramids!
And glows for the old man now, in this dusk
of skilling, belief, programme, just
those reds–with–darknesses mahogany musters
from love. A keepsake, a tower, a keep
on history's motte. While the people sleep.

to Huw Jones, my GP who attended me there; to Valmi Roberts, my neighbour, an ex–nurse; and in memory of my old friend the architect Clough Williams–Ellis who designed the place.

'The bastards's are going to shut the place'
someone comes shouting, 'And in the name of health!'
cries another. Dame Charity enters : a moment of calm:
'They cannot mean it.'
But do. Send on a Pantomime Dame.
It's farce this; not drama.
Statistics fly past like custard pies.
Also movement by stealth.

Nextbed off for further treatment, the burnsman also.
I'm home in the town. The other man died.
The town is furious. Marches. Meetings.
There is after all a worthwhile drama
for the Mabinogion to watch.

Back to a town grown stiff with anger,
far beyond rumour. Stiff and fixed as the lettering
on a good slate tombstone, or the unalterable
lines
of legend. Back with the certainties of health
to the place where people live.

'a wonderful, incomparable, dissident kind of post-Georgian poetry, unyielding in its intellectual rigour, its craft or its politics. Rattenbury is the last in a remarkable tradition of long-lost English communist poets... who looked back to Edward Thomas, and further back to William Morris, for a vision of radical England and radical English poetry.'

'The poems, often dark and bitter, explore how capitalism has soiled the beauty of the landscape; his voice vacillates between anger and regret, but is always precise and focused.'

'I've not read much of Rattenbury before. Now I will.' 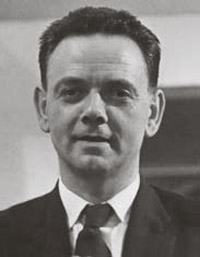 Arnold Rattenbury was born in 1921 in China, where his parents were Methodist missionaries. After the Second World War he edited the radical magazines Our Time and Theatre Today, and worked full-time for the Communist Party before embarking on a career as an exhibition designer. He published seven books of poetry, Second Causes, Man Thinking, Dull Weather Dance, Morris Papers, The Frigger Makers, Living Here and Mr Dick's Kite. He died in April 2007, shortly after putting together Several Forms of Speech.