Dunstanburgh - OUT OF PRINT 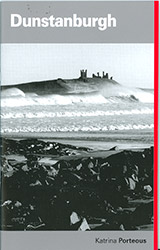 No road leads to Dunstanburgh Castle; but over the course of a year Katrina Porteous, who lives within sight of this lonely Northumbrian ruin, visited it in all weathers, minutely observing its seasonal changes. The result is this poem, first broadcast on BBC Radio 4 in February 2004. Dunstanburgh draws on the local legend of a child trapped in the rock and of the Seeker who must search for her; on the memory of raids by Scots reivers; and on the political ideal of 'good lordship' which the castle was built to embody. Using chants, dialect and the wild music of the castle itself - kittiwakes, skylarks, swallows, waves, wind and rain - the poem evokes the secret history, human and natural, of this mysterious, windswept place.

Find me a spring. Dig me a lake
To surround my tower. Make
A silver island of the mind.
Let it shiver in the wind,
That, like a meeting with a twin,
Or like a ghost beneath a glass,
Or like a mirror and a face,
Or like an echo from the past,
Like a lily, like a swan,
Like a vision or a dream,
You may read it as a sign,
The reflection of the stone
Like the pages of a book,
Like a sword fast in a rock,
Or like a key without a lock,
Or like the Isle of Avalon.

An August night. Above the clouds
Over the Egyncleugh, the moon

Rises. The wind is slowing down,
The world relaxing into sleep.

Not a bird on the water. Only the hush
Of the long grass, and the sea's wash,

And the slightest stir of birds on the cliff –
A cleared throat, a chuckle, a cough:

Water–marked wings the colour of stone,
Drift through the thistles; and the moon,

Climbing, draws a path across
The darkening water; phosphorous

Catching the ripples as they run
In liquid silver, a seething shoal
Of scales and fire.

The castle walls
Loom higher in the dark, a great
Wrecked ship. The moon illuminates

Daisies, studding the decks like stars.
Its brightness calls, and all light things answer.

In the courtyard, around the foundations,
The kitchens, the chapel, the Constable's chambers,

A web's bulls–eye in the moon's full glare.
On the arc of its journey, fierce white fire

Catches and fills a heart–shaped window.

And the deepest dark of the castle walls –
Doors going nowhere, hearths, holes,

Garderobes, stairways bent at odd angles –
Join with the wider dark, the miles

Of field and heugh, and wind–blown fell,

Millennia of dark, the men
And women lost beyond recall,

Absorbed in silence, earth and stone.

Th' bring nae baggage
An', when they've fled,
Leave nowt but widders
An' empty beds;
Empty bellies
An' hairts as sair
As fields a stubble
And esh. Aah sweer,
Though this be the country
God forgot,
The divvil receive
The reivin' Scot!

'a musical score for voices and natural sounds... a recording to be heard through the eyes. Katrina Porteous is probably one of the most exciting musicians around at the moment.'

'I wish I'd heard the broadcast.'

'an epic, both in scale and effect... succeeds entirely in conjuring a wall of noise, layered and merging... filmic, acutely visual... it's a rare pleasure to be able to read about one's homeland and recognise it so clearly'

'History as lifeblood... not as ghosts, but as part of the earth and of us.'

'This 'radio poem' gets the ruins to sing.'

'One of the most exciting talents of the North East'

'A poet with an ear that few can match' 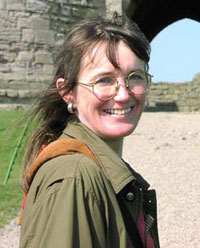 Katrina Porteous' books include: The Lost Music (Bloodaxe 1996), The Wund an' the Wetter (CD with piper Chris Ormston, Iron Press 1999) and The Bonny Fisher Lad (The People's History 2003).