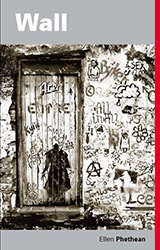 Fifteen year-old Kylie is in trouble. Her Mam is depressed, her Dad spends all his time with his pigeons, her brother is involved with drugs. And now Kylie is pregnant.

Set on the Byker Wall estate in Newcastle, Wall is a novel for teenagers in verse. As Kylie and her family struggle to hold their lives together, they tell their stories in their own words, painful testimonies in the language of text, graffiti, rap, rhyme, a hand-written note on a table, a message left on an answerphone.

Wall is about the erosion of a working-class community. It asks important questions about class, generation, love and endurance. And it asserts the precarious survival of love, loyalty and hope. Wall is about the walls we build inside ourselves and between ourselves, the walls which protect and the walls which divide. Will Kylie keep her baby? And will it grow up to be just another brick in the wall?

A discussion with Ellen Phethean about Wall has been included in the podcasts made available by the Poetry Trust on The Poetry Channel; she also discussed her book, and other books about Tyneside teenagers, on the BBC Radio 4 Open Book programme in June 2007: use the BBC's Listen Again feature to hear the programme, or go direct to that item of the programme.

I often stare out
me bedroom window: I can see
a gang of lads and lasses: they look small
from up here. They hang about, nothing to do
nowhere to go, cannot kick a ball even
so they sit, wait, smoke, swear, laugh and drink
scaring the bairns, the old folks as they call out.
Mam says they're animals, they're not, nah.
She says it's a jungle, the bushes grow too tall
you might get jumped on by chava's
rapists, smackheads, or what all.
People say it's rough. Nah, its not that bad
I should kna, I live here, in the Byker Wall.

Kylie looks out of her window at night

Sometimes
I lie in bed with the curtains open
before the moon rises.
On a clear night yer might see one
travellin ever so slowly
remote and cold
like those mini diamond ear studs in the sky
not stars;
Dad pointed one out to me
once up the coast
we were on a long sandy dune
with only the sound of the surf
and a huge black sky:
You have to be patient, he said
to look, and wait. And
if yer lucky, yer see
a little pin point of light
moving through the stars
in a steady line. And we did.
That's a satellite, he said.
Just imagine it whizzing messages around the world
could be from Australia
or Aberdeen.
A radio wave bounces off the earth, up
into space, hits the satellite dish
it¹s like a bat, bounces the wave back
to another part of the earth.
Just remember that, he said
When your troubles seem too big.

Which surprised me
cos normally all Dad sees in the sky
is pigeons.

Everything fell apart:
Mam got down, Sean got wilder;
Granda was the only one could stop him.
Dad. Well. He's just Dad.
And I felt lost.
Like when things yer rely on,
yer cannot trust them no more.

But Nana, she's been solid
as a wall, stronger than all of us.
I divvent kna what I'd de if she wasn¹t there.

Take Mam.
When it comes to her
I might as well be a switched off moby
or made of glass
or a tv with the sound down;

I might as well be dead.
Sean's all she's bothered about.

Sean's me big brother,
he never sits still, he's never quiet
he's like a tidal wave takin over
yer cannot avoid him
he's everywhere taking up space
getting into trouble.
Never bin to school since he was 12
since Mr Cairns
made him sit in the Removal Unit
all day til 4 o'clock. No Break,
no dinnertime. Just sitting.
Did his head in, so much sitting still.
All because he threw a book
and swore. In the end he broke a chair.
Mam says he didn't mean to.
He couldn't help it. He's hyper.
There's all sorts of words for Sean,
but basically when he's on a radge, he's mental.
I tell you, it drives me mental
when he comes in my room
fiddles with me stuff.
Cack–handed, breaks things
just by pickin them up.

An he's crap at reading an writin,
He's got other skills,
Mam says. Yeah
like twistin her round his little finger
he's mint at that.
He'd win prizes the way he acts sweet
and she'd be first to hand em out.

But me?
If I get wrong off the teachers
Mam hoys a fit
or if I get a good report
she says. Oh Aye?
like I just said
it's raining.
She's more interested
in Coronation Street
than she is in me,
I'm tellin yer. It's shit.
So. I say nowt.
No point.

She's only bothered about me
going ter school cos
the Welfare Wifey sent a letter;
they said it's her fault
if I don't go.
I divvent see why, like
but it makes me laugh –
she hates getting them
Official Letters.

'Ellen Phethean's wonderful novel in verse... weaves together the languages of speech, text, bureaucracy and TV with skill and style. Every secondary school should have this book.'

'I enjoyed Wall - interesting, thought-provoking, grounded in the real.'

'These voices draw you into their world. Authentic, moving, funny and sad. Wall is a rare thing - a page-turning novel in poems. It has pace, style and panache. We know the world of Wall. We live it. It is up and running.'

'Inspired by stories collected during a year-long residency in the Northeast's Byker, Wall is a wonderfully Geordie book - in subject and telling. The multiple Tyneside narrators in Ellen Phethean's raw, closely observed, disquieting novel in verse capture life right now in the declining urban community around Newcastle's Byker Wall. This is a powerful tale about walls, about barriers, and how we overcome them in a community which may be Byker but could be anywhere...'

'a powerful and effective work'

'a gripping, moving human story told as a set of poems. It works brilliantly.' 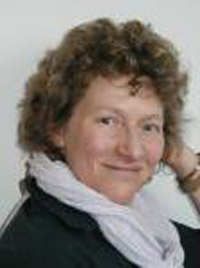 Ellen Phethean wrote Wall while she as working as writer-in-residence in Byker for Seven Stories, the Centre for Children's Books in Newcastle.

With Julia Darling she founded the Poetry Virgins and Diamond Twig press. She currently teaches Writing for Children at the Centre or Lifelong Learning in Newcastle. Although her poetry has been widely published, performed and broadcast, Wall is her first full-length book.