The Arrival of the Orchestra 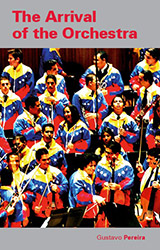 Gustavo Pereira is one of Latin America's most prolific poets, the best-known Venezuelan poet of his generation, a leading spirit in his country's Bolivarian revolution and a prominent supporter of President Hugo Chávez (who once invited him to serve as Minister of Culture). Pereira has written over 30 books exploring Venezuela's Spanish, Indian and revolutionary traditions. In 2008 the Caracas World Poetry Festival was dedicated to Pereira. A member of the Venezuelan National Constituent Assembly, he is the author of the preamble to the Constitution of the Bolivarian Republic of Venezuela which defines culture as a legal right. The Arrival of the Orchestra is the first publication of Pereira's work in English.

'Capitalism is the end of history' (Francis Fukuyama)

metaphors but not poetry.

The arrival of the orchestra

I think silences are good
But how long must these silences last
Enough of silences
Let the orchestra come!
Let the grave, raucous and
melancholic blaze of the great tempest come!
And the sweet street ballad
And the noise of people and cars
And the entire guitar of my breast
made to resonate by the hurricane
Let life come
with its peaks and troughs
Let the seas and winds come
and the rains and desolation
and the dust of the roads and the fatal
mists of solitude
Let mad fortune come wearing a Phrygian bonnet
To know we are alive!

The Pemones of the Gran Sabana call dew Chirïké–yeetakuú, which means Saliva of the Stars; tears are called Enú–parupué, which means Liquor of the Eyes, and the heart, Yewán–enapué, is called Seed of the Belly. The Waraos of the Orinoco Delta say Mejo–koji (Sun of the Breast) to describe the soul. To say friend, they say Ma–jokaraisa: My Other Heart. And to say Forget they say Emonikitane which means To Forgive.

They are so emotionally confused
That, with good reason, refined people that we are,
we call them savages.

'In this remarkable book, Gustavo Pereira reflects with insight and eloquence the reawakening in Venezuela that offers us all the threat of a good example.'

'There are only a handful of poets on this planet who can write political, intelligent, uncompromising poetry that is still relevant and accessible. Gustavo Pereira is one such poet. His poetry is direct, his focus is clear; he is a true revolutionary who has chosen his weapon well.'

The Arrival of the Orchestra John Green worked for many years as a television journalist in the GDR and later a trade union officer in Britain. He is the author of Engels: A Revolutionary Life.

Michal Boñcza grew up in Argentina and Poland; he now lives in London, where he works as a graphic designer.

The poet Eduardo Embry fled Chile after the coup in 1973. Two collections of his poetry, The Book of Tricks and Manuscripts that Water Erases have been published in Chile and Venezuela. He lives in Southampton.