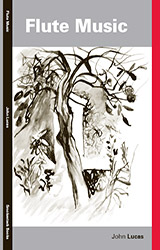 John Lucas's new collection makes extraordinary poetry out of ordinary life - a pint of beer, a cup of coffee, jazz, poetry and the history of 'Bloody England'. With subtle craft and wry wit, he locates his democratic art in everyday conversation, remembered, overheard, imagined. Lucas's anarchic poetic alter-ego Thorn Gruin turns up as usual, joined here by the ghosts of Socrates, Gary Sobers, George Crabbe, Brian Clough and Duke Ellington, a flock of starlings, an army of Daves and the not-so-legendary Doug Haskin's Hot Six. From domestic interiors to international politics, Flute Music is a manifesto to the provincial and the urban, the domestic and the familial, a book that is proud to takes sides with the 'ragged-arsed' and the 'common' against all 'swats' and 'toffs' everywhere.

My eighth birthday. 'But please, don't invite him!'
I knew which friend was meant, the one I'd scour
lane and hedgerow with, break open conkers'
shoe–tan gloss, or haul down hips and haws
his whiskery gran would steep, then store for wine.

Was that the problem? Her wet–eyed cackle,
'that'll put lead in your pencil', as each filled glass
was plonked in front of visitors. Or his mother,
seams painted up her legs. 'She's taught him words
no decent boy should know, let alone use.'

'I've got ter go in when mi bleddy mam's bin lav',
he yelled over the fence once, to cancel
our morning's plan. Common, that was it. So,
a dull, sulky party, and who to blame?
Years later I had the answer. Bloody England.

'Move over God – Cloughie's coming.' Message written on card and left among the thousands of tributes that arrived at the City Ground after news reached Nottingham of the death of Brian Clough.

Brian Clough is gone, red–carded by cancer.
Rough–tongued shaman, rogue, blest necromancer
who blazed new life into clubs, players, teams –
losers no more but playing out their dreams
as tricksters. 'Get rid of racists!'
Brian's order. 'We've done with fascists.
And by the way, no swearing, gentlemen.'
And the Trent End sang 'the referee's an orphan.'

He coaxed their wit, gave thumbs up to a pride
they hugged like trophies brought home by each side
he set free for the joy of it. 'The best
manager England never had,' some claim,
which may be so, although a fairer test
of worth than braggadocio sports–page fame
is that, of thousands packing the Market Square
to mourn this day, half have no love of the game
he loved, but all loved him, that cross–grained, rare
man whose sending off's brought them to fill
this place for one last time and holds them still.

Sonnet Beginning with a Line by Sir John Davies

'If there were, oh! An Hellespont of cream',
Or, let's suppose, a Bass Straights of draught beer
Stretching between us, to prove my extreme
Want of you I'd plunge right in and steer
To where I'd have you lie, warm and abed,
And take no mouthful till I reached your side,
Though suns might sear my throat and winds bring dread
Of a proroguing, moon–tethered tide.

Or should a press of storm waves force me under
I'd fling back up, picturing where you are,
The round world's seven–in–one true wonder,
You image my all–found utopia.
I'll make it with no help from light above,
And who needs ale? Not me, I'm drunk on love.

'Lucas's poems have the essential timbre of integrity and humanity, they are a declaration of what life could and should be.'

'Lucas is a dab hand at social observation. The language crackles with colloquial art.'

'Sometimes, reading the Sunday-paper celebrities of our time, I fear I don't like poetry. It's a relief to come across the real thing again.'

'so enjoyable that I'll be searching out his earlier books'

'that rare thing, a socially, politically committed poetry, with sympathies firmly rooted in the Socialism we have shamefully almost lost sight of' 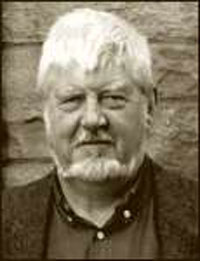 John Lucas is Professor Emeritus at the Universities of Loughborough and Nottingham Trent. He is the author of many scholarly and critical works, including studies of Dickens, John Clare, Arnold Bennett, Ivor Gurney and several books on English poetry, Romantic and Modern writing. His translations of the poems of Egils Saga are an Everyman Modern Classic.

He has played cornet with many jazz groups in the Nottingham area, where he has lived since 1964. He runs Shoestring Press.