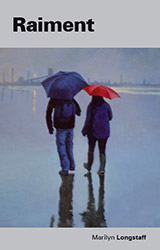 Raiment is a book about the ways in which we clothe our bodies and our spirits. It is a study in faith and disappointment, bras, knickers and the whole armour of God.

According to the popular Easter hymn, 'Angels in bright raiment rolled the stone away, / Kept the folded grave clothes where thy body lay.' For Marilyn Longstaff, the cerements in the vacant tomb are a symbol of spiritual mystery and an image of religious emptiness. She is a pilgrim, a stranger in a strange land, tempted by the guilty pleasures of the flesh and beset by a Puritan's consciousness of sin and injustice.

These are poems about the flesh and the spirit, cheerfully balancing desire and loss, hope and failure and finding satisfaction in small pleasures in a world that contains no angels in bright raiment.

Glad that I live am I
gobstoppers and hard liquorice, sucked
through a hanky, thinking Miss Feather won't notice
That the sky is blue
steaming Wellingtons too close to the coke stove
and the smell of damp infants
Glad for the country lanes
emptied galvanised bucket catches clanking raindrops,
the school yard, an iron grey sea
And the fall of dew
and sopping raincoats on the pegs
and luke–warm milk with cod–liver oil capsules
After the sun the rain
beyond the yard, hills of terraces –
redbrick, their slates glistening
After the rain the sun
wet playtime again and extra sums

This is the way of life
Till the work be done

All that we need to do
is learn our letters and our tables,
add up bakelite money, read 'Janet and John',
avoid Miss Feather's ruler–edge on our knuckles
Be we low or high
enough to look out of Victorian windows
without standing on Miss Feather's desk,
Is to see that we grow
like my Friday afternoon painting – a huge girl
feet planted in emerald grass, triangle–skirted body
in white no–man's–land, head in the clouds
Nearer the (bright blue) sky.

Ken Barlow is sitting up in the double bed.
He is on the right hand side as I look at it.
He is wearing uncreased, buttoned, tartan pyjamas.
His hair is immaculate, shades of blonde/grey.
His glasses – half moon – are perched towards the end
of his nose. His knees are raised under the bed–clothes.
He is attempting yesterday's Guardian crossword.

I was asked for my next of kin, 'Just a formality
if anything happens on the hike.' I made up Mike,
Mike Nicholls, 14, Spring Gardens, Hetheringstall,
M33 4ZU. I said he was my brother.

I hope no–one has to contact him. Mike's very shy.
He's asked me not to put him down on forms, but
I've no other alibi. He's 6ft 2 and blond, wears glasses
has a squint. His hair is thinning now

just at the temples. He works in a department store
in Oldham. Never married; had a girlfriend once,
called Sandra. She ditched him for a merchant seaman.
Mike lived with Mum until she died.

Stayed on in the bungalow – it seemed easy.
He'll be 52 next birthday, January 5th. If I go first,
which seems quite likely, I'll leave him
all my worldly goods – they don't amount to much:

a few bun pennies, my clothes, Love Me Do
by the Beatles, some sticks of furniture. I travel light.
What more could he ask from me?
I've given him a life.

'A poet with an immense talent to engage and amuse. Longstaff is also brave enough to turn a peeled eye to life's disturbing realities.'

'Marilyn Longstaff's unique voice is resonant of the way English history swings between the puritan and the cavalier, the Bible and the feathered hat; with wit, honesty, intelligence, those good servants, she confronts her delicious sins of desiring sexy shoes and freedom. Her Raiment shines with truth and beauty.'

'These poems take a look at clothed body and naked soul. Funny, tender, rueful or angry, they cast a keen light on the human condition.' 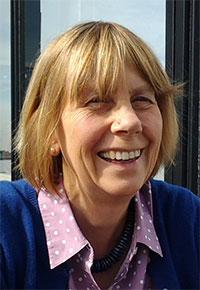 Marilyn Longstaff is a member of the Vane Women collective in the North-east of England. Her previous books include Puritan Games, Sitting among the Hoppers and Raiment (also published by Smokestack). She lives in Darlington.