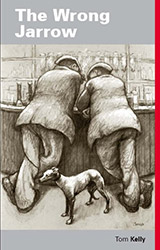 Jarrow was once called The Town That Was Murdered. It is still a painful site of popular memory, a shameful emblem of industrial decay and deprivation, immortalised by grainy newsreels, the photographs of Bill Brandt and the speeches of Ellen Wilkinson. Tom Kelly has lived in Jarrow for most of his life, but he sometimes feels as though he is living in the wrong Jarrow, as though the ghosts of the past cannot leave the place.

The Wrong Jarrow brings together poems from Tom Kelly's previous books, Their Lives, The Picture from Here, That Time of Life and John Donne in Jarrow as well as new work. It is a clear-eyed picture of the North East today, where deprivation and unemployment are supposedly a distant memory. It also includes a sequence of poems inspired by the paintings of Norman Cornish, charting the life and times of a working class community, something this collection achieves with passion and honesty.

In the wrong Jarrow
there's no cobbled streets
no men hunched round corners
eyeing up the ground
there's no gas lamps and hobnailed boots
singing down Ellison Street
there's no one gathering around the Town Hall with banners
and the Bishop Of Durham
isn't saying it's wrong.

It's the wrong Jarrow
the hunger should be more real
like in some African state
trousers should be shiny, threadbare
there should be more hate
policemen should use truncheons more
let's see more blood
broken bones.

Working on the Slag Heap,
Palmer's off–white
waste mountain
running through it
dark as blood.

I've got this photograph blu–tacked on my wall,
five men staring at the camera,
knowing precisely who they are.

It's late in the 1930s; they are at the Blood Pit,
two or three of them are boxers
they've got that look:
hit me, I'll smash you back.

There's one in the middle
that smiles, he must be a manager
of sorts, he has his arms round the others.

'put down with a spareness it is difficult to find these days.'

'there's heartache and pain within these short, plainly-written poems'

'Kelly writes with an uncomfortable rawness and directness. Not to do so would also be a betrayal… The cumulative effect of reading this book is to be exposed to an honesty we are in much need of.'

'a collection that deserves to be widely read.'

'Tom Kelly's gaze is compassionate, steady and unflinching, his tne fdirect and unsparing, his integrity resonant throughout these poems.'

'a forceful little collection, unremitting yet not without a background compassion.'

Tom Kelly has written many plays, including The Black Hill at Blaydon, The Machine Gunners, I Left My Home in Roker Park, The Blaydon Bricklayer, Dan Dare: The Musical (with John Miles), Kelly (with Alan Price) and Tom and Catherine, a musical based on the life of Catherine Cookson (also with John Miles). He is a life-long Sunderland supporter and lives very happily with his family and two cats in Blaydon.