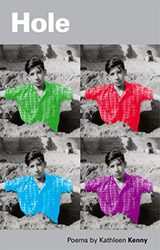 Kathleen Kenny was brought up in a family where her father and her brother never spoke to each other. Hole is the story of a lifelong struggle to understand the unspoken secrets contained in the silences of her childhood, to measure the damage and the hurt of its 'strange normality'. Set against the changing landscape of the west end of Newcastle in the 1960s, Kathleen Kenny connects 'the accidental fall from childhood' to the violent demolition of a working-class community making way for the promise of a new Brasilia.

Me and Jimmy in a Hole

They are seen at such distances,
summer ghosts

at Whitley Bay, you in the big sand
digging the best hole ever:

so deep you can stand up to your chest.

I'm the little pest, jumping in
disturbing its tight–packed surface

receiving a slap on the way down,
treading your feet to make myself tall

before you crumple me
with your new–manly hands

then spread your arms over the sand,
smirk for the camera.

We're in that hole together
no matter what they say.

We're in that hole together.
I'm down there with you.

Too many kittens, not enough mousers:
This lot are gannin in the pail.

Laid out in the bin
warm ashes resuscitate them.

Now Dad must drown them again.
I throw Jupiter in the tatie bag and run.

Jimmy flies up to his room
with a pile of jam and bread.

He's remembering the tot
they said he pushed in

that hot bank holiday.
Dumb. No one knows anything.

He was six then, Dad seventeen
when the First War silenced him.

Great Wars and small tragedies.
Secrets from before my birth.

Unknown sadnesses I came among,
buried like dead kittens

then resurrected,
then reburied.

Let's make pastry, and gravy,
feed it to the dolls,
spoon it into Dorothy's tight mouth:
watch her grimace, watch it cake.

Let's sit them in front of Quatermass and the Pit
or the Wednesday Play
where that woman gets a gun shoved in her face:
Swallow this you bitch!

Her lips round the nozzle. And the gold fish
I didn't mean to kill. My Brother's pet
lathered up, placed in a jam–jar to dry.
And the stray he named Jupiter.

Yes, it could be from a star
or a planet full of cats
but swung by the tail it screams
just the same. Squeals for mercy. Helpless.

'This is an impressive collection. These are deeply-felt poems suffused with a poignant sense of loss. They relive important moments with an admirable freshness and deft control. They are tender and touching, and have a universal aspect as time passes on us all.'

'Kathleen Kenny's poems are well crafted, intellectually sharp and emotionally convincing. The title poem, Hole, is especially strong and convincing. One of the main themes is that of family, in all its intimate complexity, deepening as the years go by. She does justice to this deepening complexity in poems placed at different points in the book so that the reader gets a sense of a certain haunted and haunting quality in the work. The reticent tone of the writing intensifies this rare quality and demands that the poems be read again and again. I find it a pleasure to do this.' 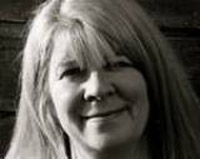 Kathleen Kenny is the daughter of an Irish mother and an Irish-Geordie father. Her previous poetry collections include Sex & Death (Diamond Twig), Goosetales and other Flights (Koo Press), Sandblasting the Cave (Flarestack) and Firesprung (Red Squirrel Press). She lives in Newcastle upon Tyne, where she works as a creative writing tutor for the Centre for Lifelong Learning.