Germany - OUT OF PRINT 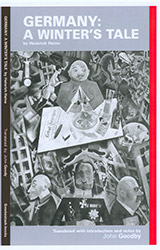 Admired by Marx, quoted by August Bebel in the Reichstag, published by Rosa Luxemburg on the eve of the Spartakist uprising, banned by the Nazis, re-written by Brecht and by Wolf Biermann, Heine's Germany: A Winter's Tale is one of the most political poems in European history. It is also one of the most entertaining, sometimes called 'the wittiest feuilleton in world literature'.

Published four years before the revolutions of 1848, it reflects the extent of Heine's friendship with Marx, and takes beautifully-judged satiric swipes at Prussian expansionism, German Romanticism, liberal complacency and a swarm of Heine's fellow writers. A work of sly wit, magical realism and epicurean relish, polemic and fantasy, the poem looks forward prophetically to the German future. Heine's chief concerns - exile, war and revolution, art and propaganda, political repression and cultural identity, the threat of hyper-power hegemony - are as relevant today as they were one hundred and sixty years ago.

It was in the glum month of November,
with days growing overcast,
and the wind tearing leaves from the trees,
when I left for Germany at last;

and as I approached the border,
I felt a stronger pounding
against my ribs (I believe my eyes
even began to water);

and when I heard German spoken
I felt strange–as if, and this
is the only way I can put it–my heart
had haemorrhaged in bliss.

A little harpmaid was singing.
She sang with genuine feeling,
in a falsetto–and yet I was still
deeply moved by her keening.

She sang of love and love's sorrows,
of self–sacrifice, and of meeting
again, up in that better world
where ends all woe and grieving.

She sang of this wretched vale of tears
and of those friends, snatched too early
from us, of souls transfigured
by joy for all eternity.

She sang the old denial hymn,
the Pie–in–the–Sky–Bye–and–Bye
they croon to that dozing lout,
the People, when it stirs and cries.

But I know the tune, I know the text,
and I know all those authors–
how they secretly swig wine
while they publicly preach water.

I'll sing you a newer, better song
my friend–about how we want to build
the Kingdom of Heaven, right now,
right here, in this existing world.

We want to be happy on earth,
we won't put up with hunger–
why should the idle belly be stuffed
at the hands' expense any longer?

There's enough food for everyone–
come to that, enough roses too,
and myrtles, desire and beauty,
and, last but not least, garden peas.

Yes: sweet, juicy peas for everyone
as soon as the pea–pods split!
We'll leave Heaven for the angels
and the sparrows to inherit–

and if, after death, we still sprout wings,
we'll want to pay you visits
up there and, well, we'll dine with you
on blesséd tarts and biscuits.

So: a newer, better song–
one scored for fiddle and flute;
the miserere is outdated,
the passing–bells are clappered out.

The maiden Europa is betrothed
to that good–looking genius
Freedom; they lie there, embracing,
they've indulged in their first kiss.

And if priests withold their blessing
their vows are no less valid–
long live bridegroom and bride,
and the children of their marriage!

My song's pure epithalamium–
better, newer!–and in my soul,
stars of the most exalted
consecration are ascending–

inspired stars, they go nova
blending into fiery streams–
I feel miraculous strength; I could
smash oaks into smithereens!

Since I set foot on German soil,
magic juices have coursed my veins–
the giant is earthed to his mother,
and his powers revive again.

'This poem is broad and high-minded. It sneers at time-serving in a way most of our modern poets, in search of a ready audience, a market, daren't. Imagination, it says, is all that can save us. Behind all its clever, sharp, funny vitriol is a quiet plea: let power cede to imagination and insight and we may make a world worth living in.' 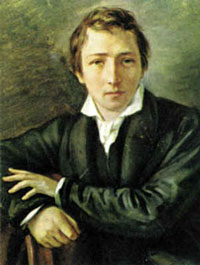 Christian Johann Heinrich Heine (13 December 1797 – 17 February 1856) was a journalist, essayist, literary critic, and one of the most significant German poets of the 19th century. He is best known outside Germany for his early lyric poetry, which was set to music in the form of Lieder (art songs) by composers such as Robert Schumann and Franz Schubert. Heine's later verse and prose is distinguished by its satirical wit and irony. His radical political views led to many of his works being banned by German authorities. Heine spent the last 25 years of his life as an expatriate in Paris. 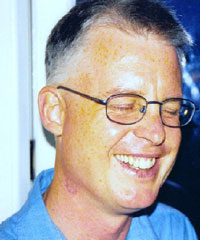 John Goodby lectures in English at the University of Wales Swansea. He has written extensively on Irish poetry and is the author of Irish Poetry Since 1950: from Stillness into History (2000). He is also the editor of Irish Studies: the Essential Glossary (2004) and Dylan Thomas: A New Casebook (2002). His critical study of Dylan Thomas, Under the Spelling Wall: the Critical Fates of Dylan Thomas, is published this year. His first book of poems, A Birmingham Yank, was published by Arc in 1998.