Crucifixion in the Plaza de Armas - OUT OF PRINT 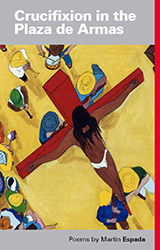 Crucifixion in the Plaza de Armas is a collection of Martín Espada's Puerto Rico poems. Espada means 'sword' in Spanish, and the poet contemplates the meanings of his name for conquerors and rebels over the centuries. He writes of colonialism and the movement for independence, from the Ponce Massacre to the epic life of Clemente Soto Vélez, a poet imprisoned for 'seditious conspiracy'. Espada also creates a narrative of family, searching the mountains for the grave of his great-grandfather, or bearing witness to the struggles of his cousins to survive.

These poems insist on the details that give history a human face and resistance a human voice, finding transcendence in the music of African slaves, in the caves where spirits dwell, even in the miraculous mop of a janitor.

On his first visit to Puerto Rico,
island of family folklore,
the fat boy wandered
from table to table
with his mouth open.
At every table, some great-aunt
would steer him with cool spotted hands
to a glass of Coca-Cola.
One even sang to him, in all the English
she could remember, a Coca-Cola jingle
from the forties. He drank obediently, though
he was bored with this potion, familiar
from soda fountains in Brooklyn.

Then, at a roadside stand off the beach, the fat boy
opened his mouth to coco frío, a coconut
chilled, then scalped by a machete
so that a straw could inhale the clear milk.
The boy tilted the green shell overhead
and drooled coconut milk down his chin;
suddenly, Puerto Rico was not Coca-Cola
or Brooklyn, and neither was he.

For years afterward, the boy marveled at an island
where the people drank Coca-Cola
and sang jingles from World War II
in a language they did not speak,
while so many coconuts in the trees
sagged heavy with milk, swollen
and unsuckled.

The lover of a subversive
is also a subversive.
The painter's compañero was a conspirator,
revolutionary convicted
to haunt the catacombs of federal prison
for the next half century.
When she painted her canvas
on the beach, the FBI man
squatted behind her
on the sand, muddying his dark gray suit
and kissing his walkie-talkie,
a pallbearer who missed
the funeral train.

The painter who paints a subversive
is also a subversive.
In her portrait of him, she imagines
his long black twist of hair. In her portraits
of herself, she wears a mask
or has no mouth. She must sell the canvases,
for the FBI man lectured solemnly
to the principal at the school
where she once taught.

The woman who grieves for a subversive
is also a subversive.
The FBI man is a pale-skinned apparition
staring in the market.
She could reach for him
and only touch a pillar of ash
where the dark gray suit had been.
If she hungers to touch her lover,
she must brush her fingers
on moist canvas.

The lover of a subversive
is also a subversive.
When the beach chilled cold,
and the bright stumble of tourists
deserted, she and the FBI man
were left alone with their spying glances,
as he waited calmly
for the sobbing to begin,
and she refused to sob.

'The book is a subtle plea, all the more powerful for the beauty and restraint of its writing, for independence for the oldest colony in the world, a superb poetic testimony to the unfortunate endurance of the colonizing mentality and the inevitable resistance it engenders.'

'a book of courage, beauty, tribute and rebellion.' 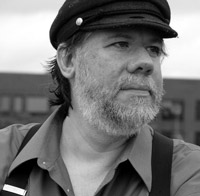 Martín Espada has published more than fifteen books as a poet, editor, critic and translator, including The Trouble Ball, Imagine the Angels of Bread, The Republic of Poetry (a finalist for the Pulitzer Prize) and Alabanza: New and Selected Poems. He has published two previous books with Smokestack, Crucifixion in the Plaza de Armas and His Hands Were Gentle: Selected Lyrics of Victor Jara. He has received numerous awards and fellowships, among them the Shelley Memorial Award, an American Book Award, the PEN/Revson Fellowship and a Guggenheim Foundation Fellowship. Espada is a professor in the Department of English at the University of Massachusetts-Amherst.