When The Metro Is Free 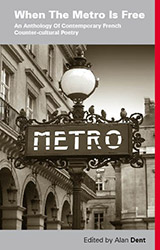 One of the student demands of les événements of 1968 was that the Paris Metro should be free. 'Be realistic,' ran another slogan, 'demand the impossible!' If such utopianism sounds touchingly innocent today, it is a measure of how far the imagination has surrendered to the impossible conditions of 'the real'.

When the Metro is Free is an anthology of counter-cultural poetry from contemporary France, representing the work of a group of poets around Francis Combes and Le Temps des Cerises. These poets are the descendants of Apollinaire and Jacques Prévert, inheritors of the bohemian tradition of questioning everything, bearers of Marx's idea that nothing human can be alien to us. Although their approaches are radically different, they share the same existential charge, wrestling with the essential problem of modern life - the relationship of the individual to society.

Francis Combes, founder of Le Temps des Cerises, France's most famous radical poetry publisher, draws on history to demystify the absolutes of contemporary ideology. Françoise Coulmin explores the narratives of historical female sensibility. The veteran Jacques Gaucheron recalls past conflicts and old comradeships. Gerard Noiret fuses the banal and the extraordinary. David Dumortier takes us on a sharp-witted, amusing trip through the underworld of the Metro.

When the Metro is Free is a series of sketches from the Left-bank of the contemporary imagination, postcards from France's literary counter-culture, poems snatched from the maelstrom of the contemporary - urban, urgent and vital - engaging with daily life and with the struggle to humanize it.

'Alan Dent's translations are out to give you more than just a free ride on the metro; they're showing you that maybe it's dawned on French poets, words need to hauled back from their metaphysical to their everyday use.'

'a book I have revelled in and I have taken to like a newborn being slapped into life.'

'a well produced anthology, this offers a welcome chance to explore and assess the radical poetry of France under M. Sarkozy's watch'

When The Metro Is Free