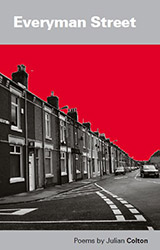 There is an Everyman Street in every town. It's anonymous, familiar and home-sweet-home for winners and losers, for the lost and the lucky, the stuck-in-a-rut and the just-passing-through, for the butcher, the baker and the trouble-maker. When Anwar opens a corner shop he sets in motion a series of tragic events which leave Everyman Street and its inhabitants changed forever.

Everyman Street is a book of poems which is part soap-opera, part radio-play and part tragedy.

No. 15b: Ordinary People

The Browns at 15b are ordinary people.

They keep a fairly tidy house
She is down to five fags a day
He drinks four bottles of beer a week.
Holiday once a year in Lanzarote.

Elliot enjoys internet shopping
Takes Robert to football on Saturday afternoon
Plays badly in Sunday League for The Blue Magician..
He is a refuse collector at the Council
Takes lots of showers
Smells of cheap aftershave and deodorant.

Marian has a job at the newsagents
Cleans at the school, town hall and hospital
Does a Saturday at the out of town Tesco
Watches Eastenders and Coronation Street.
All this work keeps her figure trim
Only her skin hints at ancient poverties.

He drives a maroon Skoda
She an old, red Fiesta runabout.
Both complain there are not enough places on the street to park
He thinks of raising a petition
But quickly remembers his council position.

After ten years they still enjoy sex together, once a week
Kiss Robert goodnight after a bed–time story.
The Browns have no known ambitions
No frustrations, no hidden talents.

The Browns are the happiest people on Everyman Street.

In the car it's Bob Dylan, Neil Young and Led Zeppelin
In chambers, the appropriate gear for every official occasion
The return of long lost town artefact
The personally commissioned Lowryesque portrait.

Named in gold letters on the honours board
The same man in every town across the nation.
Populace bends to an unyielding will
The pretence of liberalism
Pluralism, equality opportunity
His traditional status quo opinions
Supported by minutia of AGM meetings.

Makes pacts with the devil to push business through
Smooths over conflicts of interest, especially his own
In the correct, politically correct manner
Despite skin as thick as a rhino's.

Knows whose calls to take and those to ignore
Which photo call enhances a 'Handy Andy' reputation
Or incubates petty jealousies, the wrath of grumpy men.
Has splinters in his arse from sitting on the fence.

Though Andy started with the best of intent
Does he really believe he can still change the world?

Getting a gun is easy:

Blade walked into the snooker hall
Spoke briefly to a man who gave him door work
Left half an hour later with a rifle
Concealed in an oversized snooker cue box.

Killing a man is a different matter:

Blade toyed with the idea of using the knife
Slashing Ali's throat.
Too messy and Ali had protection
Both probably armed.

He would take out Ali from a distance
Like The Day of the Jackal.

Time for practice
Formulating the scenario:
He went into the woods, shot a few rabbits.
His cool eye still sharp.

He could shoot the wings off a butterfly.

'an original book which deserves attention'

'tempered with a cool, razor-sharp insight into popular culture, and a passion for the eccentricities of working class life.' 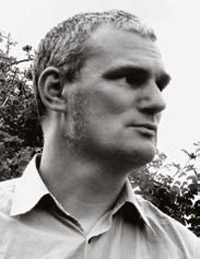 Julian Colton lives in Selkirk in the Scottish Borders with his wife and three children. Previous publications include Something for the Weekend (2001), Two Che Guevaras (2007) and a book of ghost stories for children, The Looking Glass Years (2004). He is one of the editors of the magazine The Eildon Tree.