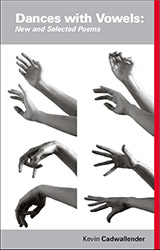 Kevin Cadwallender was raised by a pack of vowels but found himself in a land of no sun, scant noons and jive cadets. Poetry came to him as a scrabble board of acne mists and algae guns. Escaping the polar hotels, he has since dwelt among larded nuns and in the seediest towns.

Dances with Vowels brings together poems from twenty-three of the many small-press chapbooks Cadwallender has published since 1984, as well as from his three full-length collections of poetry, Public, Baz Uber Alles and Colouring in Guernica.

Angry, funny and surreal, these poems explore the world of the underdog, the world of the crawling from beneath the boot, the world of turning over clouds to find the silver lining and scraping graffiti on its cumulus underbelly. Dances with Vowels has a heart that beats for its native North East. Lewd and clear.

Julian is an existentialist. He works on a building site
with Tom the labourer, Fred the brickie and Bob the hod carrier.
It works like this: Tom fills Bob's hod up with bricks,
Bob carries them to Fred and Fred builds a wall.
Julian's job is to help the bricks understand their own reality.

Tom has ham sandwiches for lunch, Bob has cheese and Fred has egg.
Julian doesn't have lunch as he feels this is saying 'no'
to a society which insists on social imperatives such as lunch.

Sometimes the bricks argue with Julian saying
"But we have the right to freedom"
Julian smiles, "man is condemned to freedom"
"But we are bricks" they cry, "why do you oppress us?"
Some days the walls just don't get built at all.
Julian doesn't sleep well.
He dreams of a mass uprising of bricks,
of boundaries collapsing all over suburbia,
of Sunday morning street warfare with flymos
and hovers clashing over disputed inches of turf,
of middle-class landowners with nothing to keep
their mortgages in…
Secretly,
Tom practises hod carrying
Bob practises bricklaying
and Fred is doing a night class in sociology.
Julian is an existentialist and lives outside
of the restrictions placed upon him by the
constant problem of having no self to esteem
and no self to be 'ish' with
this however does not prevent his sleeping
with the gaffer's daughter who has
a Btec in Freudian hairdressing,
which means that everytime
she cuts someone's hair
they look like a dick.

the gramophone in the Crown Posada
scratches out George Formby
whose wife never let kiss his leading ladies,
but I would kiss you.
We drift along the quayside like untethered boats
touching, barging, jostling ,
Your faith is unsinkable.
We are slow mourners
heads low up Dog Leap Stairs
pausing to forget to kiss
under the viaducts at Castle Keep
and deep into the day and into our pockets
we drink in one corner
or another of The Bridge Hotel.
This Tyne that flows like ale over dreamers.

I am waiting for
unrequited love at Central Station
It is a train that never stops arriving.
Her text is enigmatic she is tardy
a word I found in 'O' level Lear
but almost appropriate here
in the tiled splendour of the Centurion.
she drives my bonnie dreams away
I keep my feet as still as bed linen
My heart is happy through the night.

Victoria Regina sits looking
up the skirts on the Bigg Market
from her throne outside of St.Nicks,
no Alberts in sight
but plenty of Tom, Dicks and Debbies.
From bar to bar to bar,
searching for a taste of what we are,
and love is kebab cheap
or brief in the darkness
of a hire purchased car.
and the fog on the Tyne is
a timeshare investment.

The girl in the Windows arcade is singing Verdi.
the poets huddle in the Tower behind the Gate
Newcastle is no longer just a city of starlings.
Morrissey mentioned Skipsey at the City Hall
lost on his disciples, apostles of the shopping mall.

I am drinking cooking lager in the Crown Posada
Listening to George Formby,
whose leading ladies were never kissed
Evangelists and minstrels merge at Monument,
The clear white light looks blue.
Grainger Town is about to cast off
its concrete overcoat and dance.
Naked as the Baltic, the Sage's mirrored snail.

This Tyne, from now
until forever running
Between you and me.

There are loads of planets with a North

It doesn't make me a hero,
or an alien doctor from the BBC
It's just a part of what I am
and a part of who I claim to be,
Time and relative distance
in space from the naughty north
to the sexy south and all this
is relative to where you are
of course.

There are loads of planets with a north

And I live in the south to the Scots
who espouse that I'm just English
and there is no difference and borderline's
are arbitrary and part of this condition
In Lapland they would laugh in the face of a Glaswegian (stupidly)
if they said they were northern
and geography is the rules
they teach you in school,
so assume the position.

There are loads of planets with a North

Just because you say something
doesn't make it so,
Turning the world upside
down exchanges one pole
for another pole,
From compass pointless arguments
about history and tradition
the London scene appoints its leaders
and they begin an expedition.
To teach us what we know inherently to be true
that labels like North and South
have got everything to do
with the landscape of redundant issues,
with the way you say your vowels
and they layer on the patronage
with linguistic whoops and howls.
There are lots of planets with a north
and just as many with a south
Some times it seems it's just a case of who
or maybe whom has the biggest mouth,
I would shout it from the rooftops
but I may be misunderstood
I could buy a whippet and a flat cap
they say it's in my blood
I have been flattening my vowels
like Chaucer did before me
If I talk in my own dialect
why do some people ignore me?

I am for richness, diversity
of speech and thought
Ignorance is only knowing your place,
poverty is a label that can't be bought
I am a product of years
of nurturing this industrial chip
on a shoulder meant for digging coal
and welding bits on ships
So what's the point in industry
when nothing is worth making
It's more than hard to tell a Charv
the can of worms he's waking
and that's a mixed metaphor
if I ever I saw one
I am standing at a crossroads
with my Novocastrian hard on
and Dr.Whoever and whatever
you say goes
but you couldn't catch a cold
with that elitist pose.

It doesn't make me a working class hero
to sigh as David Tennant
suppressing those rich Scots vowels
or him a traitor for his anglicised speeches.
I won't fight him on the beaches
Or castigate linguistic teachers
Or take the piss out of North East creatures
For covering the deck chair
of the Queen's English
With an indecipherable dialect towel.
There are lots of planets with a North
To misquote the Doctor as this poem aborts.
You can take the man out of the language
But not the language out of the man.

What are we afraid of?
What are parochialists after,
For Charver read chav,
for laffter read laughter.
I digress as words run their course
Dicks for Dictionaries,
Encyclopaedophiles,
Pedants and much worse,
fuck it
There are loads of planets with a North.
Why aye!

'an extremely readable collection... real poetry among the beer, the chips and the football.'

'an act of insurrection is never too far away.'

'Cadwallender is an excellent poet because he has something to say and says it in interesting and clear ways. Cadwallender's work will live when much of the highly-praised twaddle of our time had been consigned to due oblivion.'

'It is a great thing when one can read a collection of poems and laugh all the way through.'

'Somehow the streets of Newcastle seem to be speaking.'

'Kevin Cadwallender is a poet who often shelters in the shadow of his more confident comedic alter-ego. But there's a tender side to his work too, vulnerable, wistfully reflective and loaded with that underlying melancholia which so often sits upon the shoulder of our great comedians.'

'Life's gentle reporter, an angel-fire talker, putting a wry spin on our walk.'

'There’s an anarchic energy in these poems…from despair and rage to tenderness. Their power, skill and intelligence will speak to many.' Hartlepool-born Kevin Cadwallender has worked as a clown, floor tiler, student nurse, policeman, record shop manager, care assistant, play leader and roadie and as a writer-in-residence with the Co-op, the Great North Forest, the Sunderland Echo and James Cook University Hospital. A former editor of Hybrid and Sand, he has published a novel, Sugartown. His Radio 4/Soundscape voice play, Voyages was short-listed for a Sony Radio Award. Has also made four films with Anton Hecht: Steam Powered Poetry Engine, Falling Down, Around the World in Eighty Days and Born in a Field. He lives in Drubhinge, the capital city of cold ants.