Permanent Winter - OUT OF PRINT 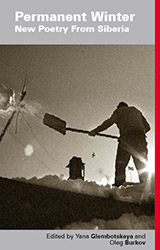 Siberia has been always linked in the British imagination with violent and wintry extremes - exile, snow, howling wolves, salt-mines, Gulags and sub-zero temperatures. Rasputin was born in Siberia. Lenin was exiled there. Mandelstam died there. Maxim Gorky once called it 'a land of chains and ice'. But Siberia is also a place of winter magic, a land of extreme natural beauty crossing seven time zones, of ice-princesses and talking bears, frozen mammoths and the shamans who walk among the dead.

For some, Siberia still represents the 'authentic Russia'. For others it is a place of wild escape, or the place where European Russia meets Asia head-on. For 40 million Russians - including the poets in this book - Siberia represents home.

This anthology brings together, for the first time in English, a selection of contemporary poetry from Novosibirsk, Siberia's largest city and the exact geographical centre of Russia. Writing about their extraordinary country, they have adapted Russian literary traditions to its exceptional conditions. There are the love lyrics of Maxim Ukolov, the imagist verse of Sergey Samoylenko, the experimental poetry of Igor Loshilov and Viktor Ivaniv, and the strange, magical free verse of Igor Davletshin. Five poets and five aesthetic and linguistic experiences, united only by the weather.

last year I lived at the bottom of a bottle

In a country that doesn't appear on any maps
But stretches across a continent
Like the skin of an unkilled bear.
I was living in a mining town,
Just like Gorki on Capri,
Drinking with my neighbour,
A typical Siberian muzhik.

I wrote nothing all year.
I only left the house to hand in the empties.
And if I saw the postman
I told myself that he wouldn't be looking for me.
When I woke with a hangover
My brain hurt,
My neighbour gave me a glass of eau–de–Cologne
And told me what was happening in the country.

My neighbour drank like a fish.
We started in September and didn't stop until March,
When we finished the last bottle
Of home–made wine.
By then, the mercury was bubbling in the thermometer,
And we were seeing everything in triplicate,
While the moon, sharper than a scimitar,
Stared at us through the broken window.

While we were drinking,
Winter suddenly sobered up,
And the swollen skin of the country
Began to shrink.
The tap was dripping. My neighbour
Fell off his chair in a heap on the floor.
The window–frames rattled.
The bubble was about to burst.

I was still hung–over. April came
And the new epoch leisurely
Stood on my throat
With its steel–capped boot.
Drops of Kapel hit my brains
Like a screw–driver.
Shivering and burning like the taste of home–brewed vodka,
I just had time to think: I feel terrible.

I write with a glasscutter
On tablets of stone,
I write with hot metal
In the margins of a notebook,
Between the staves,
In exercise–books,
On old receipts,
In bars at night,
On my deepest instincts,
On crisp notes,
Bread coupons,
On the walls of the communal flat,
On playing cards,
On military maps
(Because I do not write to scale,
The General Staff cannot read it),
I write on water,
On the Kuril islands,
On Tibet,
I write on you,
I write on me.
This is wrong, of course:
Using a glass–cutter
To write on the soul
Can be messy.

the tiny dots crawl down the glass

The tiny dots crawl down the glass,
A patterned line of rain–drops gleams,
A line of disappearing mirrors –
How strange the window seems!

Shadows appear in the window–frame
Beams of sunlight divide in the trees
So don't start that old song
About dear old Chaos. Please.

When I am gone, you'll start your whining.
But I'd rather you said nothing at all
While I'm around. Just don't die yet.
Heaven is too big for us, Hell too small.

Don't touch the song you can hear,
Don't combine or end up alone,
This is a song of beauty, an old embrace
Of Russian blood, of Tatar bone.

Don't sing! Shut up! It's not amusing.
We are too weary to be fond.
Fatigue drags me down. What seemed like music
Is struggling up and far beyond.

The cornice splinters like a spear,
I'll pass, inaudible, immune,
Into the sleeping World's ear
Where all our voices merge in tune.

'This anthology of Siberian poets is built around five right-angles. Such space organization seems to be dynamic: each of these five authors moves in his own direction, extending the common area and extending our notion of what Siberian poetry is today.'

'Treat this volume with caution' Yana Glembotskaya has published widely on English and Russian literature. 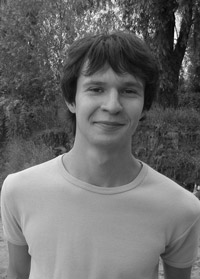