There Will Be No Miracles Here

Stephen Sawyer’s remarkable first collection is a book about politics – public dreams, private desires and common fears. From a Merseyside housing estate in the 1960s via Pinochet and Thatcher to the floods in Sheffield in 2007, these poems trace the sutures of power and resistance on the body and under the skin through the mediations of love, death, class, art and oppression. They raise questions about identity and belonging in a time of rapid structural and technological change, and celebrate the creativity and courage of individual and collective responses. There Will Be No Miracles Here is a book of passion and humour about people who live at the sharp edge.

‘Steve Sawyer's poems want to get the world and what he knows of it onto the page and across to his reader: this compulsively readable book shows exactly how successful he is. Laureate of a northern city, custodian of its recent but all-too-quickly disappearing past, he is also the engineer of unlikely romance and a speculator on the possibilities of art and imagination.’

‘Steve Sawyer’s poems have a prism-like quality in that they bend and separate the braided threads of history and memory into their constituent, illuminating colours. Through this parsing of detail, and the transforming qualities of his art, Sawyer’s poetry stands out as being both deeply imaginative and committed, wide-reaching, humane .’

‘These poems surge and swell so each one feels like travelling. A splendid collection, full of fascinating strangers and tender observation, lit with humour and joy of language.’

‘a passionate, authentic and exquisitely executed portrait of changing landscapes and borderlines.’

‘This must be one of the most accomplished debut collections from any poet in quite some time and deserves to be read and relished. A triumph.’

There Will Be No Miracles Here 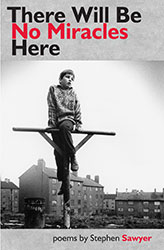 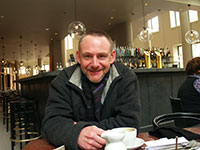 Stephen Sawyer had worked as a naval rating, bartender, dental health worker, painter and decorator, actor, stand-up comic and, most recently, as a university lecturer in the social sciences. He lives in Sheffield.