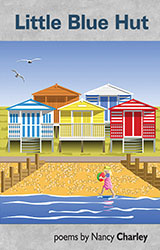 In 2011 Nancy Charley spent six weeks in a little blue beach hut on Tankerton Slopes, near Whitstable on the Kent coast, recording the changing tides and shifting moods of the shingle beach. Little Blue Hut is a book about weather and water, bladderwrack and gutweed, swimmers, dog-walkers and sea-anglers, cormorants and blackheaded gulls, ‘resident birds’ and ‘transient people’. And always the horizon where sky merges with sea. In the first half of the book the Water-Watcher tells her tale, exploring the mysteries and the ‘bizarreries’ of the Thames Estuary and finding, like a beachcomber, myth and poetry in the rarely noticed details of everyday life. In the second half of the book a woman is summoned by the three female genii of the coast – Luna, Marina and Hertha. Helped by the birds, she discovers who she might be, whilst berthed in the safety of the Little Blue Hut.

A Song of Hibernation

‘Nancy Charley is in her element here, the element being water: water caught in its own riptide of language, water under the sway of the Moon, water bewitched by spells that may be aligned with white or black magic. Reading at my desk, I felt the foam between my toes, heard the words crash and retreat in my ears. There’s a lot of pleasure to be had here: wade in.’

‘These watchful poems conjure the world of the shore-line and bind you in their spell. Rich with the music of waves and the tang of salt, they dive in and out of the natural world and its ancient enchantments. They celebrate the mysteries of change.’ 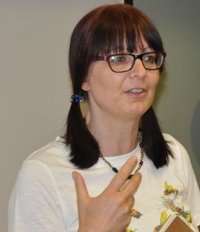 Nancy Charley is the archivist at the Royal Asiatic Society. Her recent collections include Little Blue Hut (also published by Smokestack) and the illustrated The Gospel of Trickster.