The Long White Thread of Words 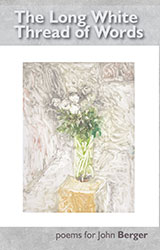 Novelist, draughtsman, film-maker, essayist and critic – John Berger is one of the major European intellectuals of our time. Since the 1950s he has been challenging the way we see the world and how we think about it in books like Ways of Seeing, Permanent Red, To the Wedding, A Painter of Our Time, Pig Earth, Once in Europa, Lilac and Flag, A Seventh Man, Pages of the Wound and From A to X. In 1972 he won the James Tait Black Memorial Prize and the Booker Prize for his novel G. In 2009 he was awarded the Golden PEN award by London PEN for a lifetime’s contribution to literature. His Collected Poems was published in 2014. The Long White Thread of Words is a celebration of John Berger’s ninetieth birthday by poets from all over the world. Edited by Amarjit Chandan, Gareth Evans and Yasmin Gunarat nam, it features poets from Australia, Bulgaria, Canada, China, Cuba, France, Greece, India, Indonesia, Iraq, Italy, Kenya, Macedonia, Nigeria, Palestine, Spain, Turkey, the USA and the UK, including Elaine Feinstein, Nikola Madzirov, Valerio Magrelli, Anne Michaels, Andrew Motion, Daljit Nagra, Sean O’Brien, Michael Ondaatje, Ruth Padel, Claudia Rankine and George Szirtes.

Amarjit Chandan has edited and translated many writers into Punjabi, including Neruda, Ritsos, Hikmet, Vallejo, Cardenal and Berger. His most recent book of poems is Sonata for Four Hands, with a preface by Berger. Gareth Evans is the Film Curator of London’s Whitechapel Gallery. He conceived and curated the six week John Berger season across London in 2005. Yasmin Gunaratnam teaches Sociology at Goldsmiths College. Her most recent book is Death and the Migrant: Bodies, borders, care.

The Leather of Love

‘As a tribute to a thinker and a writer of world renown, this is a lovely book... it’s also a great anthology of world poetry.’

The Long White Thread of Words

John Berger was born in London in 1926. In 1972 he won the James Tait Black Memorial Prize and the Booker Prize for his novel G. In 2009 he was awarded the Golden PEN award by London PEN for a lifetime’s contribution to literature. He lives in a village in Haute-Savoie the French Alps.