There were once more than a thousand men and boys worked at Brandon Pithouse in County Durham. Today the site of the colliery is a green wilderness. John Seed has set out to recover the lost and silent world of Durham pitmen – in the company of Walter Benjamin, Sid Chaplin and Charles Reznikoff. Composed of fragments of recorded speech, parliamentary reports and newspapers, Brandon Pithouse is a book about the experience of labour – about the pain and danger of working underground, about the damage to the human body and about the human relationships created in such conditions. It is a study in the attachments and distances which shape our relationships to place and time, the negotiations required to reconnect ourselves to a world that ceased to exist in the 1990s. It is a set of notes for an unmade Eisenstein film and a footnote to chapter 10 of the first volume of Marx’s Capital. And like any history, it is a ghost story.

‘John Seed has done it again. His historian’s mind and his poet’s ear combine to lift voices out of their documentary shafts and arrange them in artificial visual forms that slow down our reading eyes just enough so that we can hear the voices too, bearing testimony amid the statistics and documents. It’s secular magic.’

‘John Seed is not inclined to call this work poetry but it uncertainly is – simply by the weight of the emotional truth it bears within it and through the factual interpretive discipline in the attention it pays to its fabrication. Its fluidity, its adherence to its materials, its rhythms, cadence and vernacular, produce a verity of being – the being of a way of life now gone. I implore you to read this work.’

‘a poetry book that deserves a place in every Durham home.’

‘a cartographer of darkness... a scrapbooker of a coal town’s dark past.’ 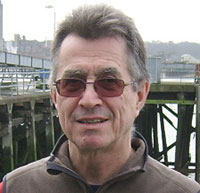 John Seed has written ten books of poetry, including Pictures from Mayhew, New and Selected Poems, Some Poems, 2006-12 and most recently Smoke Rising: London 1940-41. Other books include Dissenting Histories: religious division and the politics of memory in eighteenth-century England and Marx: A Guide for the Perplexed.