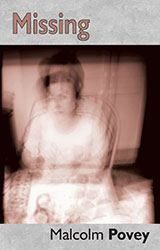 Malcolm Povey began writing these poems when Jackie, his wife of forty years, a teacher, painter and print-maker, was diagnosed with cancer. After her death in 2008 he found himself stranded on ‘grief’s glacier’, adrift ‘on loss and loneliness’ and talking to his dead wife. Missing is part of that continuing conversation. Refusing the consolations of religion, or comforting ideas about an afterlife or an immortal soul, he forces himself to contemplate the unbearable facts of death, and that his wife is now beneath ‘six feet of indifferent earth’, her ‘loveliness gone underground’.

Missing is a book about illness and death and loss, the meanings we seek in death and find in life. It is a book about the stark pain of suffering, but it is also a book about love and warmth and solidarity. Learning to live with the ‘ever-present absence’ of his wife, Malcolm Povey insists that people are worth loving, that love does not die with the flesh, that poetry can sometimes help us cut through the well-meaning drivel the bereaved must often suffer when those that they love die first, and that we survive in the memories and practices of those left behind, the mingled joy and sorrow of a remembered gaze, giggle, conversation or caress.

‘The spectrum of feelings – sentiment, strong emotion, passion – is brought unflinchingly to bear upon the subject of loss. Malcolm Povey chronicles and anatomises mourning with wit, intelligence and unabashed integrity. You will be moved in ways you could hardly expect.’

‘Missing reads like an extended conversation between the writer and his late wife, the artist Jackie Povey. Like her works, its poems often start from small domestic events but scrape through to layers both intimate and raw. These poems are powerful and personal but universal.’

‘a powerful and positive book that cuts to the heart of the matter.’

tears in the fence 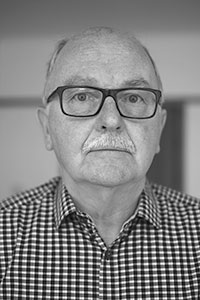 Malcolm Povey taught until recently at Bournemouth University. His first collection Sedgemoor was published by Smokestack Books in 2006. He lives in Bournemouth.