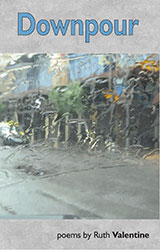 Ruth Valentine has worked as an undertaker and as a celebrant at secular funerals. In this new collection she draws on her experiences to compose an extended meditation on dying and death, its emotional grammar and its painful but necessary rituals. Bleak and brave, serious and sad, Downpour is an unflinching study of the physical realities of dying. Bodies are prepared for burial, coffin lids are closed, and scattered ashes sail downriver. An old man’s coffin enters the furnace, his memories becoming part of the wider world. The invisible dead joy-ride through London at night and the disinterred dead stir in Bosnia and Baghdad. Valentine explores the geography of death – hospital corridors and waiting rooms, winter tides, tearful winds and rain-swept cemeteries – and considers the strangers – doctors, mortuary assistants and undertakers – who must escort us towards oblivion, conscious of ‘their own death and your death, / the death of the planet and the death of hope’.

Rain on a summer evening, not yet dark. The storm longed for all day has trundled off to startle some implausible quiet place, ploughed fields and outbuildings, a shingle beach. Rain cataracts through foliage, jumps back up from a flat black roof, plays downpipes, hoppers, gutters, as if they were Benjamin Franklin’s glass armonica, liberty as melodious as love. A woman opens a window, stands aside. The man she loved for years, years later left, won’t now come back; she watched his coffin carried in the heat into the grey stone chapel. No bound flowers, a few embarrassed speeches, and quite late that song he once liked. His son will spread his ashes on the river. This rain upstream in Marlow or Oxfordshire reaching Barnes Bridge will swirl and sail him out.

‘In the title poem of this moving new collection, Ruth Valentine reaches for “some implausible quiet place” Her search takes her through cityscapes and conflict zones, often finding it in interiors, both physical and mental. Many of the poems are concerned with the silent realm of death, eloquently bridging the space between this world and the next. She speaks her empathy and compassion for humanity in poems that are always precise but lyrical.’

‘Valentine is a formidable poet at the height of her powers. The poems shine with her close and specific observations of the world. She is always in control of the line and language, and the words lift “as melodious as love” with their own music.’

For many years Ruth Valentine’s worked with refugees in London. Her poetry collections include The Announced (2009) and On the Saltmarsh (2012). She has also published Asylum, Hospital, Haven (1996) and a novel, The Jeweller’s Skin (2013). She lives in Tottenham, London.