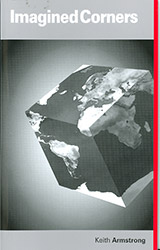 For over thirty years Keith Armstrong has been taking his poetry to what John Donne called 'the round earth's imagined corners' - giving poetry readings in the Soviet Union, Bulgaria, Poland, Iceland, Denmark, France, Germany, Hungary, Spain, Sweden, the Czech Republic, the Netherlands, the United States, Jamaica, Kenya and Cuba. At the same time he has been exploring some of the imagined corners of his native North East of England, its sometimes heroic past and its post-industrial discontents.

Imagined Corners brings together, for the first time, poems from all the corners of Keith Armstrong's imagination. It's a trumpet call to those who, in the words of John Donne, are the victims of:

It is a manifesto for the public ownership of poetry. It's a hymn to a broken internationalism. And it's a beery love-poem for the North East.

My Father Worked on Ships

My father worked on ships.
They spelked his hands,
dusted his eyes, his face, his lungs.
Those eyes that watered by the Tyne
stared out to sea
to see the world
in a tear of water, at the drop
of an old cloth cap.
For thirty weary winters
he grafted
through the snow and the wild winds
of loose change.
He was proud of those ships he built,
he was proud of the men he built with,
his dreams sailed with them:
the hull was his skull,
the cargo his brains.
His hopes rose and sunk
in the shipwrecked streets
of Wallsend
and I look at him now
this father of mine who worked on ships
and I feel proud
of his skeletal frame, this coastline
that moulded me
and my own sweet dreams.
He sits in his retiring chair,
dozing into the night.
There are storms in his head
and I wish him more love yet.
Sail with me,
breathe in me,
breathe that rough sea air old man,
and cough it up.
Rage, rage
against the dying
of this broken-backed town,
the spirit
of its broken-backed
ships.

Watch me go leaping in my youth
down Dog Leap Stairs,
down fire–scapes.
The Jingling Geordie
born in a brewery,
drinking the money
I dug out of the ground.

Cloth–cap in hand I go
marching in the jangling morning
to London gates.
Jingling Geordie
living in a hop–haze,
cadging from the Coppers
I went to the school with.

Older I get in my cage,
singling out a girl half my years
to hitch with.
Oh yes! I am the Jingling Geordie,
the one who pisses on himself,
wrenching out the telephone
his Father placed off the hook.

Listen to my canny old folk–songs;
they lilt and tilt into the dank alley,
into the howls of strays.
Oops! The Jingling Geordie
goes out on his town,
rocking and rolling a night away,
stacking it with the weary rest.

See my ghost in the discotheque,
in the dusty lights,
in the baccy rows.
Jingling Geordie,
dancing gambler,
betting he'll slip
back to the year when the Lads won the Cup.

Well I walk my kids to the Better Life,
reckoning up the rude words dripping
like gravy off me Granda's chin.
Whee! goes the Jingling Geordie:
figment of the gutter brain,
fool of the stumbling system,
emptying my veins into a rich men's–palace.

Down by the old Quayside,
I heard a young man cry,
Among the nets and ships he made his way.
As the keelboats buzzed along,
He sang a seagull's song;
He cried out for the Rights of you and me.

Oh lads, that man was Thomas Spence,
He gave up all his life, just to be free.
Up and down the cobbled Side,
Struggling on through Broad Chare,
He shouted out his wares
For you and me.

Oh Lads, you should have seen him gan,
He was a man the likes you rarely see.
With a pamphlet in his hand,
And a poem at his command,
He haunts the Quayside still,
And his words sing.

His folks they both were Scots,
Sold socks and fishing nets,
Through the fog on the Tyne they plied their trade.
In this theatre of life,
The crying and the strife,
They tried to be decent and strong.

Oh lads, that man was Thomas Spence,
He gave up all his life, just to be free.
Up and down the cobbled Side,
Struggling on through Broad Chare,
He shouted out his wares
For you and me.

Oh Lads, you should have seen him gan,
He was a man the likes you rarely see.
With a pamphlet in his hand,
And a poem at his command,
He haunts the Quayside still,
And his words sing.

'There are those who tell the terrible truth in all its loveliness. Keith Armstrong is one of them, a fine poet who refuses to turn his back on the wretched of the Earth. He is one of the best and I hope his voice will be heard more and more widely.'

'If you are old enough to remember Britain before it fell under the malicious spell of those who believe to catch a bus if you're over thirty is proof of failure, it will remind you of gentler, sweeter times... in place of the empty, near-manic, self-congratulatory but superficial and compensatory sensibility of modern culture, Armstrong gives us a sense of what we have lost, how we have gone wrong and reminds us of the dirt and darkness beneath the neon and glitz.'

'rooted in the Tyneside music-hall tradition, closely behind which was the august balladry of the Borders... the authentic note of the Northern poet.'

'postcards from an alternative grand tour, journal entries from another, more innocent time, when the world spun more slowly and we had time to befriend strangers and notice things... celebrating people and places, a world of anecdote and adventure, strong drink and life itself.'

His publications include Pains Of Class, Dreaming North, The Jinglin' Geordie, The Darkness Seeping, Poets' Voices, The Big Meeting: A People's View of the Durham Miners' Gala, The Town of Old Hexham, Old Dog On The Isle Of Woman and Bless'd Millennium: The Life & Work Of Thomas Spence. His music-theatre collaborations include O'er the Hills (Dreaming North), Wor Jackie (Northumberland Theatre Company), Pig's Meat (Bruvvers Theatre Company) and The Roker Roar (Monkwearmouth Youth Theatre Company). Several of his songs have been recorded by Durham indie-folk-punk band The Whisky Priests.