Nothing Out of This World 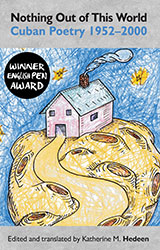 Cuba has always attracted the passionate sympathies of poets and revolutionaries. ‘Cuba, my love, they put you on the rack,’ wrote Pablo Neruda in Canto General, ‘cut your face, pried open your legs of pale gold, crushed your pomegranate sex, stabbed you with knives, dismembered you, burned you.’ Ernesto Che Guevara was a poet. The country’s national poets, Jose Martí and Nicolás Guillén were also revolutionaries. After the fall of Batista, poets like Ginsberg, Hikmet, Yevtushenko and Enzensberger visited Cuba to write about the Revolution. But Cuban poetry was revolutionary long before the popular triumph of 1959, and it has remained so despite – and because of – the profound changes on the island since.

Nothing Out of This World is an introduction to the work of thirty-six poets from Cuba writing in the second half of the twentieth-century, including Heberto Padilla, Nancy Morejón, and Víctor Rodríguez Núñez. The oldest poet here, Fina García-Marruz, was born in 1923; the youngest, Damaris Calderón, in 1967. It’s an extraordinary and heady mix, combining African and Spanish influences, realism and surrealism, colloquialism and baroque, experiment and commitment, a lucid and moving introduction to a collective poetic subject that defies all kinds of social oppression. Introduction by Víctor Rodríguez Núñez.

‘opens up a perspective which the poetry Establishment too often closes down.’

‘a very accomplished and tantalising anthology. Congratulations to Smokestack.’

Nothing Out of This World

Edited and translated by Katherine M. Hedeen. She is a specialist in Latin American poetry and has both extensively written on and translated contemporary authors from the region. Her book-length translations include published collections by Rodolfo Alonso, Juan Bañuelos, Juan Calzadilla, Marco Antonio Campos, Luis García Montero, Juan Gelman, Fayad Jamís, Hugo Mujica, José Emilio Pacheco, and Ida Vitale. She is the recipient of a 2009 and a 2015 National Endowment for the Arts Translation Project Grant. She resides in Ohio where she is Professor of Spanish at Kenyon College.