‘Time’, wrote the Roman emperor Marcus Aurelius, ‘is a river of passing events, and strong is its current; no sooner is a thing brought to sight than it is swept by and another takes its place, and this too will be swept away.’ In Roma, Bernard Saint follows the shade of Marcus Aurelius through the elastic time zones of the Eternal City. There they encounter Gregory Corso, Chet Baker, Jane Birkin and Serge Gainsbourg; they walk down the Catwalk, watch Reality TV and guide a rock-star into rehab. Like Cavafy’s Alexandria, Grass’s Danzig, Borges’ Buenos Aires – and Fellini’s Roma – this is a book about a city where time never walks in a straight narrative line. It is a book about imagination and history, accidents and architecture, faces and frescoes; a river where past, present, and future meet.

Marcus Aurelius on the Catwalk

Marcus Aurelius & the Cult of Celebrity

‘Bernard Saint has a fine intelligent eye for the parallels between Ancient Rome and the modern city. These poems are continuously enjoyable and rewarding for their alert observation and sense of history.’

‘He is a neo-classical, undeceivable poet whose own music, to adapt his lines for Chet Baker, articulate the difficult without personal bravura. These poems stay with you.’

‘An elegant evocation of Rome's unresolved and self-contradictory past and present, anchored by the ghostly figure of Marcus Aurelius, a gentle stoic whose life was consumed in warfare.’

‘Makes the Emperor’s moral seriousness an example to our levity and his austere manner of life a rebuke to the current rage of consumerism.’ 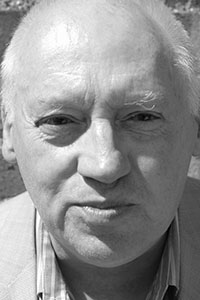 Bernard Saint was born in Cheshire in 1950. His poetry has been published in magazines and anthologies since the 1960s. Previous books include Testament of the Compass and Illuminati. He has worked as therapist and supervisor in the NHS and in the addiction recovery field. He is a member of the Jungian Guild of Pastoral Psychology and the Group Analytic Society. He lives in Bedford.