Contemporary Poetry from the Other USA 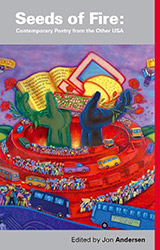 Seeds of Fire brings together the work of over fifty poets from the other USA - including Adrienne Rich, Fred Voss, Grace Paley, Amiri Baraka, Jayne Cortez and Martín Espada.

Lyrical, satirical, raging and prophetic, they bear witness against the crippling nationalism promoted by the ruling political parties and corporate media in the United States. They seek solidarity with the impoverished and war-torn working classes around the world against the forces of imperial slaughter, environmental catastrophe and social disintegration.

Some poems call us to the barricades, some to despair. Some detail the way capitalism can poison even the most intimate aspects of our lives, while others record the bloody consequences of The American Way, from Palestine and Iraq, Vietnam and Chile to the beggars on the streets of Washington.

These poets sow their seeds of fire in the hope that the real globalization project is the building of international unity among all those - including the ghosts of John Coltrane, Emmett Till, Tom McGrath, Rachel Corrie, Woody Guthrie, Emma Goldman, Tom Paine and the Blue Cat - who believe that a better world is still possible.

The pictures below were taken at US launch for Seeds of Fire, held at New York's Bowery Club, which raised three hundred dollars for the Middle East Children's Alliance.

Lord,
On 8th Street
Between 6th Avenue and Broadway
In Greenwich Village
There are enough shoe stores
With enough shoes
To make me wonder
Why there are shoeless people
On the earth.
Lord,
You have to fire the Angel
in charge of distribution.

Whenever my name
is mispronounced,
I want to buy a toy pistol,
put on dark sunglasses,
push my beret to an angle,
comb my beard to a point,
hijack a busload
of Republican tourists
from Wisconsin,
force them to chant
anti–American slogans
in Spanish,
and wait
for the bilingual SWAT team
to helicopter overhead,
begging me
to be reasonable

'None of you has ever seen a dead donkey.'

Maybe I'll give in, give up
take up prayer and reruns.

But I'd rather stay impetuous and injured
than inured – better to screw decorum
than to have decorum screw me:

sit on my hands when my fists should be pumping the air?

No – even stooped and grey I'll keep sluffing off
their sprung nets and blindsides.
I'll keep saying that this is wrong,

it's wrong, it's practical and wrong,
it makes perfect economic sense and it's wrong
it's wrong, it's the law and the invisible hand,
it's brand new, cutting edge, scientifically feasible,
it's hot, it's the American way and it's blood–bath
wrong, it's beautiful and genocidal, it's hilarious
and bloated and wrong as an underwater corpse,
it's patriotic and wrong, it's wrong I'll yell
until they could just go ahead and kick themselves
to death
for counting Grampa out
for making him this dangerous.

'a book to celebrate... concerned without being strident, committed, but to truth and justice rather than to cause of ideology, and above all radiant in its belief in the power of literature to illuminate, to enrich and to bring to every life a love of disciplined language's pleasure and revelation... one of those collections which sing to be revisited and which never lose their freshness.'

'if you have been feeling as helpless and frustrated and angry with global and national politics as I have, check it out.'

'keep this wonderful volume in the car... or buy an extra copy for the waiting room of your favourite doctor's office' 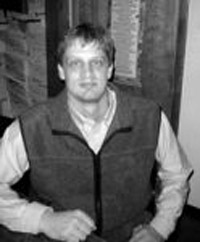 Jon Andersen lives in New England with his wife, the poet Denise Abercrombie, and their two sons. He has worked as a farmhand, a warehouse worker, a gardener and in a lumberyard. He is presently a high school teacher. He is a recipient of The People Before Profits Poetry Prize and Partisan Press's Working People's Poetry Award. Curbstone Press published his first full-length collection, Stomp and Sing, in 2005.