Paul Bunyan re-tells the legend of the giant lumberjack for the twenty-first century. Drawing on logger folklore, James Stevens’ stories and the Davy Crockett almanacs, Larry Beckett’s poem is a modern epic in ‘long-winded’ blank verse. It is a celebration of the everyday poetry of colloquial North American English, loose and rough, bragging and unbelievable. Like its eponymous hero, the poem has no purpose but plenty of pioneer spirit, drifting westward like the loggers from Maine to Oregon. He’s a ‘man mountain, all hustle, all muscle and bull bones, / An easy winner, full of swagger, a walking earthquake, / A skyscraper, looking over the tallest American tree, / A smart apple, a wonder inventor, the sun’s historian, / A cock-a-doodle hero, a hobo, loud, shrewd, brawling, / Rowdy, brash as the earth, stomping, big-hearted, raw.’

‘Beckett’s poem is a kind of Basement Tapes of American folklore.’

‘a rich feast for the senses with some of the meatiest poetry you’re likely to read anywhere today... a barnstormer of a poem.’ 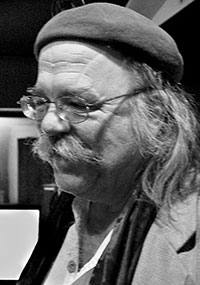 Larry Beckett’s songs have been recorded by musicians all over the world; Song to the Siren, which he wrote with Tim Buckley, has been covered by David Gray, Robert Plant, Bryan Ferry, George Michael and Sinead O’Connor. Larry Beckett’s recent books include Songs and Sonnets and Beat Poetry. He has translated many poets, including Heraclitus, Goethe and Li Po. He lives in Portland, Oregon, with his wife, the photographer Laura Fletcher.