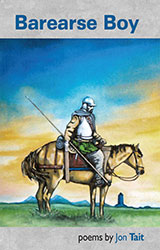 Jon Tait’s family have lived in the hills of the Anglo-Scottish borders for at least six hundred years. He is a direct descendant of a notorious seventeenth-century reiver family who lived in Barearse near Yetholm in Scotland, rustling cattle, burning farms and putting their neighbours to the sword. In this modern take on Scott’s Border Minstrelsy, Tait follows the reiver people as they are forced from their rural heartlands into the industrial and post-industrial North East of England in search of work. If Kinmont Willie Armstrong were around today, he would recognise himself and his people in a book that celebrates the working class culture of the North. Written with the lawless spirit as well as the dourness and defiance of the original Border Ballads, Barearse Boy is as rooted in the purple heather moorlands of the borders as the writer himself.

‘Tait pulls no verbal punches and creates a collection whose style veers between beat-generation prose poems and tenderly crafted lyrics.’ 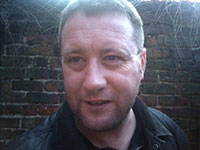 Jon Tait was born in Ashington, Northumberland in 1972. Barearse Boy is his first full-length collection of poems. He has previously published two chapbooks of poetry – Midnight at the Snake Motel and Lucky to Get Nowt – and a novel, First Plane Home. He lives in Carlisle, where he works as a postman and union rep.