The Oranges of Revolution 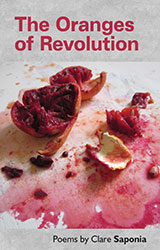 There is a spectre haunting the world, and Western governments do not know how to respond. From the Arab Spring and the UK riots of 2011 to civil wars in Syria, Iraq, South Sudan and the Ukraine, our rulers pick and choose their favourites, colour-coding the ‘good’ revolutions and demonising those whom they cannot control as ‘terrorists’. Clare Saponia carefully explores these confused and violent struggles, as if peeling a blood orange – skin, pith, flesh, pips, juice – from cause to consequence, aspiration to betrayal, defeat to renewed hopes for social justice. The Oranges of Revolution is a book about democracy and power, despotism and resistance, imperialism and revolution.

For your own good

Gadaffi Duck and the looniest of Looney Tunes

‘One can’t emphasise too much just how passionate and gutsy Saponia’s uncompromisingly polemical poetry actually is.’

The Oranges of Revolution

Clare Saponia is a London-born poet, writer and linguist. Her first collection, Copywriting War and other Business Sins was published in 2011. Her work has featured in many magazines and anthologies, including Emergency Verse: Poetry in Defence of the Welfare State and The Robin Hood Book: Verse Versus Austerity.